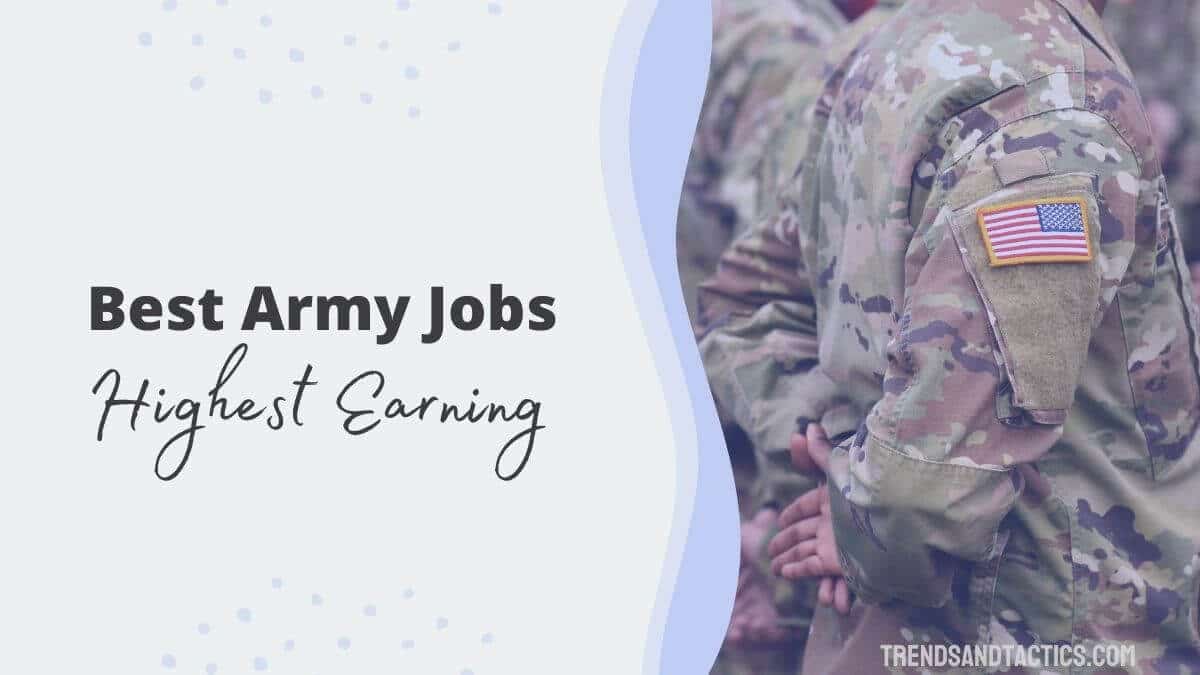 When most people think about jobs in the army, they think of active combat.

However, some of the best army jobs require very little combat at all – and instead, make it easier for you to transition into civilian life later on.

Not only that, but some of the highest paying jobs in the army are quite lucrative, too.

If you’re thinking about enlisting, consider these best army jobs to help you get started on the road toward a successful career.

This is one of the coolest jobs in the army by far! Plus, it will provide you with an indispensable set of skills for civilian life.

The Army relies on wheeled vehicles for practically every single mission. As the mechanic, it will be up to you to keep the troops moving.

You’ll likely also be consulted for how to save money on vehicle repairs.

Army vehicles are growing increasingly more complex, requiring more advanced electronic troubleshooting and maintenance than ever before with their computerized subsystems, equipment, and other features. While in the army, you can gain up to 79 nationally recognized certifications if you pursue this kind of career!

If you have strong interpersonal and communication skills, working as an HR specialist in the army might be a good fit.

This is a great option if you are looking for a job that doesn’t use your hands.

Not only will you be eligible for a job in human resources after leaving the Army, but you’ll also develop valuable soft skills that will suit you well in just about any career. If you want to earn a sign-on bonus of around $7,000 (Salary.com) – plus a cushy salary to boot – you might want to consider signing on as a geospatial intelligence imagery analyst.

Your job will be to deduce information and analyze findings from satellite and aerial photography.

This could be an interesting job for a history major that would like to study the relationship between the surface of the Earth and significant cultural events.

As an explosive ordnance disposal specialist, it’s your job to handle and safely dispose of unexploded devices, such as IEDs or chemical, biological, or nuclear weapons.

You may also be charged with setting up and carrying out emergency contamination control and decontamination stations. You’ll also prepare and maintain the tools and equipment you use for these tasks.

If this sounds appealing to you, review this list of advice for finding a job to improve your chances of success.

Also known as a PsyOp, your job as a psychological operations specialist will require you to assess the information needs of a group and to create messaging to engage a target audience.

You might analyze or research strategies for influencing foreign populations. You might also do a fair bit of traveling to aid the American government and foreign governments in times of both peace and war. As an Army medic or combat medic, you’ll provide emergency medical treatment on the battlefield and assist with evacuation.

This is a high-stress job, since it will occur directly in a combat zone. However, you might also help with outpatient and inpatient care in hospitals and surgical settings.

As you might expect, this army job will provide you with vital skills that you can use in just about any medical setting after leaving the Army.

In Europe alone, there are more than 200 combat medics – and the numbers are growing. A career as an army medic will prepare you for a career in a hospital, clinic, rehabilitation center, or even a nursing home, which is where many discharged army men and women go to work.

If you choose to work as a technical engineer in the army, you’ll likely find that the skills you gain in this job translate well to any civilian role in the construction industry.

You’ll survey, investigate, and draft up plans for construction projects – just as you might as a foreman or architect in the civilian world.

You’ll use computer programs to draft blueprints and you may be able to spend time in a lab analyzing the materials you’ll use, too.

This line of work will keep your mind and body occupied, so it can be a good job for people with anxiety.

Now this is an army job that you’re probably already familiar with!

As a US Army recruiter you’ll interview and advise civilians on the steps they need to take to join the army.

You might have contacts in the community share information about military training, distribute marketing materials, and interview and test potential recruits as part of this job.

You may even come across candidates who are having trouble finding a job, but are the perfect fit for the army.

If you’re interested in an army job that is mentally stimulating and highly interesting, then you may want to consider working as a counterintelligence agent.

Your work will be highly classified – so you’ll need to be deemed eligible for Top Secret clearance.

After leaving the army, a world of opportunity awaits you – you could join the CIA, the FBI, the NSA, or similar private sector industries. Satellite communications system operator-managers earn respectable salaries each year – but you’ll also be eligible for a hefty sign-on bonus in most cases, too.

You’ll complete up to 18 weeks of specialized training to learn more about satellite communication. Once at work, you’ll work to keep lines of communication up and running at all times.

After you leave the army, you could work for airports, police departments, or even telephone companies.

Plenty of companies hire former military members in this area, such as T-Mobile and CISCO Systems.

You’ll specialize either in deep-sea or scuba diving – and you’ll spend lots of time underwater, sometimes at depths of up to 190 feet!

Spend a few years in the army as an air traffic control operator and you’ll be eligible for an extremely high salary once you are discharged – often in the six-figure range.

You need to be highly skilled to work in this kind of job since you’ll be instructing pilots on the safest and wisest takeoff and landing procedures. Does a career in law enforcement after you’ve served in the military interest you most? If so, you may want to consider working as a criminal investigations special agent.

A highly advanced job, you will need to already be enlisted in the army and be at the pay grade of E-4 or higher. You’ll also need to have completed the Basic Leader Course and have 60 semester credit hours before applying, too.

That said, once you leave the army, you’ll be able to work in just about any role in law enforcement at the local, state, or county level.

An army nurse is a bit different than a medic – and the pay is much higher because the work is so variable.

You might work drawing blood one day and in a medevac the next. Of course, this job will prepare you well for a career in nursing (or another medical-related career) later on.

Think of these professionals as infantry – but on the digital front.

Cyber ops specialists lead both offensive and defensive operations to provide cybersecurity to the US military.

They also perform basic IT functions, helping to maintain firewalls and secure routers so that security breaches don’t occur.

To be successful at this high-paying job, you’ll need to spend up to a year in specialized technical training to develop coding and hacking skills.

You’ll be set up for a successful career once you leave the military, though – from NASA to the FBI, government agencies are always looking for talented professionals with the kind of experience you’ll only get in the military.

There are plenty of excellent careers you can pursue both in the army – as well as once you’re discharged.

Consider these army careers as you begin your life of service!