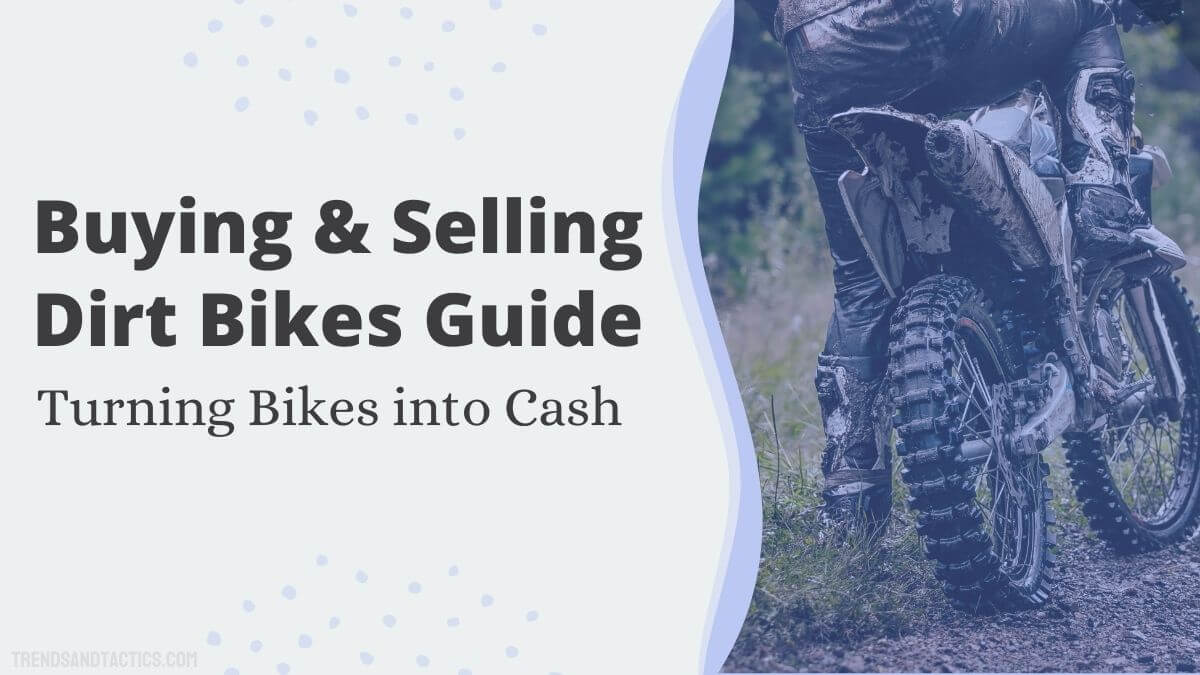 If you love riding bikes and are mechanically inclined, buying and selling dirt bikes can be quite profitable.

In the United States, dirt bikes are very popular, with the total number of sales up 6.4% in recent years.

It’s important to learn the right strategies how to resell dirt bikes, though, before you dive in. Here are the key things you should pay attention to.

Can You Resell Dirt Bikes for Profit?

One of the first things you’ll realize when you’re considering buying and selling dirt bikes is that you can definitely make a profit, but you can also lose your shirt, too.

If you don’t know what you’re doing, you can definitely put in more money than you’ll be able to get out of it.

This is why it’s so important to learn how to resell dirt bikes so you don’t make a big mistake.

When you take the time to study the industry, read up on what bikes are selling well and what ones aren’t, and where you should sell the bikes, then you can reap the rewards like some other people did.

One person who flips motorcycles and dirt bikes as a side job is able to clear roughly $1,000 per flip. He is a mechanic by trade and does that full-time.

In his spare time, he will fix up and flip dirt bikes if he sees good value.

One of the keys to his success in buying and selling dirt bikes is making sure the purchase price for him is low enough to give him a high margin.

This mechanic knows that he’ll have to not only spend money to fix up the bike, but also have to put in his own time to do the work.

He values his time, of course, so that goes into his factoring when deciding on which bikes to purchase and what ones to stay away from.

In another case, an 18-year-old bike enthusiast posted to an online forum that he’s able to make a profit of $200 to $600 for each transaction he completes. His biggest transaction to date netted him a profit of $2,000 for just one dirt bike.

It can sometimes feel like there aren’t many ways to make money as a teen, which is why teens usually turn to more creative avenues like flipping dirt bikes.

These two examples show that there is indeed potential to make money selling dirt bikes, and in fact it’s one of the best items to resell.

The COVID-19 pandemic has dealt a heavy blow to a lot of industries across the globe.

Many markets and industries that were on the rise before the outbreak of the pandemic came to a quick halt once it started. Many have started to rebound slightly, while others may never come back. There are some, though, that are bouncing back in a major way. One of those industries seems to be the dirt bike market.

Since 2019, the dirt bike market has been on the rise. A major reason for that is the number of motocross events that have been televised.

The increase in exposure via television has opened up dirt biking as an interest to more people than it ever has in the past.

One of the biggest things that have held back the dirt bike industry in the past is the high maintenance costs associated with them. However, if you take care of your bike on a consistent basis, the costs aren’t as high as they once were thought.

This increased popularity in motocross events has led to a big increase in demand for dirt bikes. For people who are just getting into the activity, buying a new dirt bike directly from a manufacturer might be out of their price range.

Instead, they turn to the used dirt bike industry to try it out before they go and buy that extremely expensive new bike from a dealer.

This is all great news for people who are buying and selling dirt bikes. A higher demand for used dirt bikes means that there will be more people to sell to.

In addition to cutting down on how long it might take to sell a dirt bike, it could also drive the resale price of the dirt bike higher as well.

Price on the Rise

More and more people are noticing this higher demand for used dirt bikes, though, which in turn is driving up the price of used bikes to begin with.

This is good when you go to sell your bike, but it’s not great news if you’re looking to purchase a dirt bike to flip.

As of last year, the average price for used dirt bikes increased by 14% over the year before. This means that it’ll be much more difficult — and expensive — to simply go online and purchase a used dirt bike that you can then turn around and flip for a profit.

You’ll have to be a little bit more specific and do your homework when you’re figuring out how to resell dirt bikes. If you aren’t, then you could find yourself losing a lot of money instead of making a profit.

Once you have purchased and fixed up your dirt bike, you’ll have many options for where you can resell it.

This is a great thing and one of the advantages to buying and selling dirt bikes today compared to even five or 10 years ago.

The proliferation of the internet has made it extremely easy to market your dirt bike for sale, and to find a large number of willing buyers in your location.

In the past, it might have been hard to find enough potential buyers to justify a higher price, at least in your location, but that’s not the case anymore.

Here are three of the best places to resell dirt bikes: In the age of online marketplaces, more people are making money on eBay selling dirt bikes than ever before, and even branching into selling on Mercari as well.

What dirt bikes should you flip?

When you’re buying and selling dirt bikes, you’re going to want to deal with popular bikes that a lot of people desire.

If you get too unique or stray too far away from the main bikes, then your potential market for buyers might shrink.

Some of the best brands brands to target are:

These brands are typically considered to make the most durable dirt bikes out there, which is why they’re very popular on the resell market.

When getting into this business, you’ll realize that buyers want a bike that’ll last. That’s because since it’s not new, the bike will need to last longer than if it was straight off a manufacturer’s lot.

Therefore, when you’re buying and selling dirt bikes, it’s great to start with those brands.

If you’re looking for basic dirt bikes, Yamaha, Kawasaki and Honda will be the best fit for you. These will sell to a lot of newer riders, since their features are more basic and easier to use.

In addition, they are typically cheaper to buy. This doesn’t mean you can’t make a profit on them; it just means they won’t be as expensive overall.

If you’re looking for a bigger challenge for a more unique bike, then you might want to try Husqvarna and KTM. They have much more robust construction and the features are higher end, too.

These mistakes can lead to disaster when you’re buying and selling dirt bikes.

You never want to be left holding dirt bikes that you don’t want and can’t sell, and you also don’t want to lose a lot of money when you’re doing so.

One of the biggest mistakes to avoid is thinking you can sell the bike for an unrealistic price.

You may have a number in your mind that you want to sell a bike for, but if that’s not what the market is saying it’ll sell for, then it won’t sell for that.

Always check first what the KBB price is for a dirt bike that you’re looking to resell. Whoever is buying the bike will likely check this, too, so you can base your price around this.

Also, if there are multiple similar bikes to yours listed, you can’t be too much more expensive without justification, otherwise your bike will never sell.

Target Bikes with Little to No Repairs Needed

Another mistake to avoid is taking on a project you can’t handle.

When you learn how to resell dirt bikes, you’ll soon see which bikes you’re good at working on and if there are any that you’re not. Steer clear of the ones that give you trouble, or the ones that have expensive parts.

If you love extreme sports and mechanics, flipping dirt bikes can be a great side hustle.

Keep trying new ways to improve the process such as selling at flea markets and building relationships with bike mechanics locally as well to source inventory.