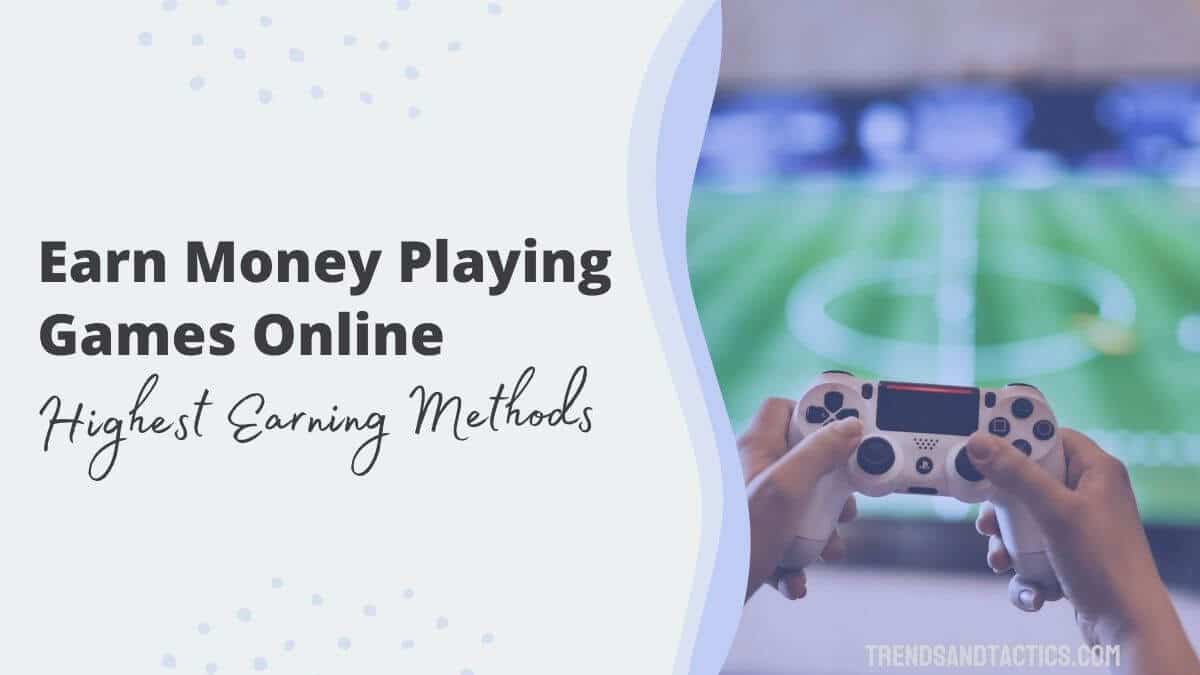 Are you curious about how to earn money playing games online?

Believe it or not, this isn’t an oxymoron – you can get paid to play games online!

In fact, the industry of eSports, or multiplayer video games, is one that generated more than $1.5 billion in revenue in 2017 alone. And that number is only increasing!

The secret to success? You just need to know where to look. One of the best ways to make money playing games online is to become a game tester.

You won’t make millions by working as a game tester, but it’s still a lucrative side hustle you can take on if you enjoy playing video games – and want to earn something for doing it.

Game testers are usually hired during the development or early launch of a game (though they’re occasionally hired for a later update, too).

Your job will be to find bugs and report them. You might play the same mission for hours, but it’s a great deal if you love to game!

In most cases, you just need to be 16 years of age or older, though it’s also a very viable way to make money with a computer science degree.

Jobs for video game designers are on the rise (at a rate of about 9% since 2016) – but people who work in quality assurance are just as separately needed. Get a degree and choose to do this kind of work full-time and you could earn up to $55,030 per year.

Blackout Bingo is one of the most popular online games you can play to earn money. That’s because you can earn money in several different ways.

Available for both iOS and Android mobile devices, this game allows you to earn cash prizes in short rounds. Each one takes just a couple of minutes and is totally free to play.

It’s just like regular Bingo – but on your phone. You’ll get tickets that you can redeem for actual cash money.

Swagbucks is a platform that will let you tap into all kinds of new money-making schemes, including making money from surveys as well as by playing games.

Available as an app for iPhones and Androids (and also accessible via a browser), this platform lets you play adventure, bingo, card, casino, dice, and puzzle games to earn money.

You can receive a payout through PayPal or even Amazon gift card payments. Plus, you only need to be 13 years old to join.

4. Be a Videogame Journalist

If you have strong writing skills, becoming a video game journalist is another option.

While it’s not a high-income opportunity and requires at least a bachelor’s degree, it’s a great career to consider if video games are your passion.

You’ll be able to play your favorite games and then write about them to make money.

Plus, it’s a job without uniform requirements, which is hard to beat.

One tip for success? Complete an internship to get your foot in the door and don’t be afraid to do some freelancing. When it comes to best tips for getting a job, internships are still underutilized by most people.

This is really a fake-it-till-you-make-it kind of job, but lets you combine your passions with your full-time gig. Playing video games for a living is still probably one of the biggest dream ways to earn money as a teenager.

If you become a professional gamer, your life will be 100% about gaming. You could win millions in events sponsored by the Major League Gaming Circuit, the Intel Extreme Masters, and the International Dota 2 Championship.

That said, most gamers will not make that much money – it takes a lot of practice! Most professional gamers who make a team still only make around $1000 to $5000 per month.

There’s no minimum age to participate or no game that’s off-limits – but you’ll have to play around with different ones to find the niche that’s right for you.

Another gaming opportunity for bingo lovers is Bingo Mania.

This app on Android and iPhone will let you play a variety of bingo games each day, making $1 a day at first, with the “pot” increasing until a winner is declared.

Here’s another unique way you can get paid to make money playing video games – teach others how to do it.

It might not seem like this is a market that actually needs to exist, but with professional gaming on the rise, more people want to know how to become more competitive.

You’ll need to get an audience through YouTube or another platform and find a way to advertise your services. Of course, it goes without saying that you’ll need to be a pretty strong gamer yourself.

However, you won’t need to meet any threshold regarding age or educational background – and the sky’s the limit when it comes to how much money you can earn.

The job of a video game coach is one that didn’t exist two decades ago – but now, this job is booming. You could earn thousands of dollars each month – and work whatever hours you’d like, too. According to Bloomberg, it’s a more than $1 billion market that’s only going to continue to grow.

With Gamesville, you will be able to log on to the website to play games, slots, and top numbers. There are also pure cash competitions if you’d rather earn cash directly instead of receiving rewards.

You need to be 18 years of age or older but you can earn around $25 per day. That said, there is a membership fee if you want to sign up for the gold plan and receive more exclusive offers. You’ll have to pay $1 to be entered in a tournament but you can receive either cash or merchandise rewards. There are also free practice rounds to let you get in tiptop shape for competition.

Earning Potential: Up to $83 per win (PennyHoarder)

Like Swagbucks, Point Club is a survey platform that will pay you to do a variety of tasks, like take surveys and, of course, play games online.

You only need to be 13 years of age and have a valid email address to sign up for this platform, available as an app and web extension. You’ll get $5 just for signing up!

MyPoints is an app that’s available for Apple, Windows PC, iOS, and Android users. You can receive cash and gift cards but you’ll have to pay to enter the daily tournaments. The Entry fee starts at 24 cents.

Cash rewards start at $10, with other options for earning including watching videos, trying new apps, and taking online surveys in addition to playing games.

Earning Potential: Up to $50 per survey (FinanceBuzz)

This is a gaming app on Android only that will let you monetize playing video games.

You can participate in a wide variety of games and receive prizes – none are actual cash but you can receive a pseudo-cash payment in the form of a Visa gift card.

You’ll get compensation from the minute you start playing and the app is totally free to use. You only need to be 13 years of age or older.

InboxDollars is a platform that is similar to Swagbucks in that it will allow you to make money while you play games online.

You can also earn money by taking surveys, completing promotional offers, and doing other related activities, too. It’s available on regular web browsers as well as an app via the App Store and Google Play.

Bananatic has a variety of gaming and prize options, all packaged into mobile apps and computer games for Android and iOS devices.

You can earn points by playing these games or by writing game reviews, recording videos, or doing other tasks.

You’ll earn “bananas” that can be redeemed once you hit $5. They can be redeemed for PayPal cash, gift cards, and more. You have to be at least 18 years old if you want to play for money.

21 Blitz, an app for iOS and Android lets you earn real cash by playing a game that is sort of like a combination between Solitaire and Blackjack.

There are both free and paid games available and you can also earn rewards with the loyalty program.

As long as you’re a US resident and 17 years of age or older, you can play this game to your heart’s content.

Game Hag is an app available for iOS, Android, and desktop users that lets you earn money in the form of gift cards and game keys.

You can earn money by playing games or completing microtasks like surveys.

As you can see from the ideas listed above, most of the ways to earn money playing games online are by spending your time on specific platforms or games.

That said, there are plenty of out-of-the-box ideas you can try, too, like participating in tournaments, offering boosting services, or even testing for bugs.

Get creative – and start gaming today to earn some serious cash!