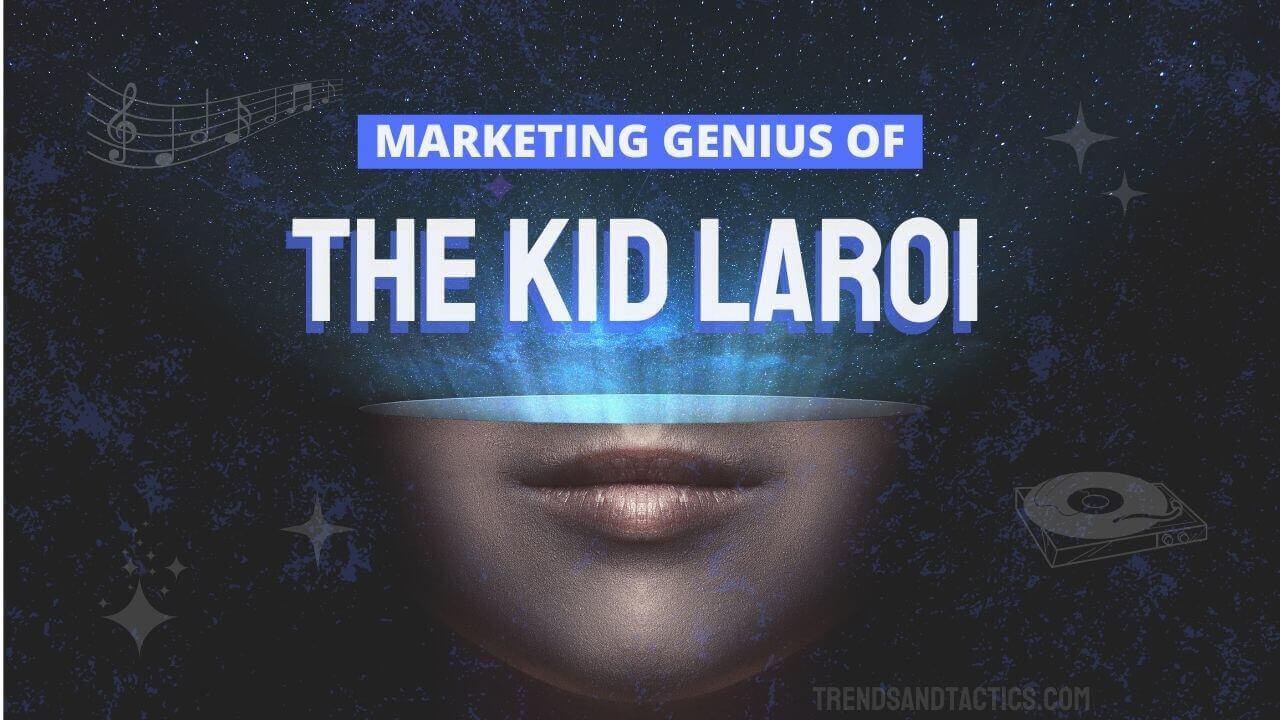 The Kid LAROI isn’t a performer that anyone would have expected to hit it big.

But, starting from a middle-class family just south of Sydney, he skyrocketed to popularity, winning the Breakthrough Songwriter of the Year award of 2021 while being nominated for eleven other awards.

Here’s how The Kid LAROI blew up, and in just three years of a career, became a household name.

Starting With A Passion For The Craft

“Anybody wherever I’ve ever been in my life, one thing they can always say good or bad, I was always doing music and I always wanted to be a rapper.” – The Kid LAROI

The Kid LAROI, born Charlton Kenneth Jeffrey Howard in 2003, has only been alive for eighteen years, but he’s already four years deep into his musical career.

With his first album in 2018 being titled “14 With A Dream,” he pinned down what his career would be about at an early age.

His earliest music was recorded with him rapping over a beat on his mother’s phone. The skill he showed with music won him a scholarship for the Australian Performing Arts Grammar school.

This prestigious private school was highly selective and has performed for everything from the Sydney Opera House to opening for Oscar winner Dion Beebe.

The Kid LAROI didn’t get to finish his education because within the first few months of getting an education there; he was already building an international name for himself.

A lot of this spread and popularity came down to his drive to get his music out there.

His early life saw a lot of trauma, and he’s repeatedly stated that he’s funneled that into his music to make it more real.

In the first eighteen years, he went through:

Finally, he saw a need to get out of this life and recognized that music was his best chance.

With the audio he recorded on his mother’s phone, he began to upload music to a Soundcloud account to a warm response.

This wasn’t enough, and he knew that if he was going to stand out, he needed to get his music directly in front of the popular names in the industry.

There were many times Laroi would go to live concert venues and bring his mix-tape to play outside of hotels where the musicians were or would send female friends to bring the music to popular musicians. This worked for him, getting him in contact with many musicians and eventually allowing collaborations with artists because of his passion.

It ultimately paid off, allowing his debut at age 14 to have connections like Grammy-nominated producer Khaled Rohaim who helped hone The Kid LAROI’s skills.

Giving TKL the chance to write on songs for greats like A Boogie encouraged him to get into the studio and record his first album.

Networking To Build A Name For Himself

Recording an album doesn’t immediately lead to success, but his ability to work well with nearly any artist opened doors for him.

The Kid LAROI was able to gain a lot more access to the music world when he created a partnership with Grade A Productions and Columbia Records, pairing him up with late rapper Juice Wrld who would mentor him through breaking into the business.

TKL lived with Juice Wrld in LA, and was able to use this time to build his unique sound and create a flow that he felt uniquely showed off his style.

Performing at the Rolling Loud Festivals in Miami and New York, he gained international acclaim and a cult following. This culminated with the music video for his song “Let Her Go” uploaded to the Lyrical Lemonade Youtube Channel.

This channel, with over 200k subscribers at the time, interviews smaller artists and helps boost the projects they’re working on and the skills they’re creating. Through this, he was able to find more artists to collaborate with, which helped boost his brand further.

He’s so far collaborated with:

He’s constantly adding more artists to those that he’s working with. Not to mention, networking is a key way how to make money as an influencer.

Although he’s put out more than one song with some of these artists, it’s clear that he understands the importance of spreading out his music as far as possible to gain an audience.

Interestingly, he seems very aware of how he fits in amongst these artists. As a result, his career trajectory follows closely with what Justin Bieber lived through at the beginning of his music career, except with far less drama.

There was still more to build onto, and this is where TikTok came in.

Connecting With Fans in Creative Ways

In many interviews, The Kid LAROI claims that he didn’t have a huge interest in TikTok at the beginning, even though it’s a popular way teenagers make money.

In early March of 2020, he put out a short clip of him rapping and dropping names like that of Addison Rae, a TikTok sensation with over a million followers on the app.

Rae found his rap about her cute and posted a video of herself showing it to her mom, the sound went viral.

The response on the app was so large that it became one of the top-played songs on the app for several months.

Boosting off the energy this gained, he released the full version of the song “Addison Rae” and released information about where to find his music and who he was.

Before this, he’d mostly been working on creating in-person connections, but once this was released, he was able to start to build a following online.

His Tiktok now has over 2.7 million followers, which is a meteoric rise since it hardly had over a thousand followers two years ago.

LAROI continued to connect directly with fans by releasing clips of his videos on Tiktok, including a remix of “Without You” with American singer Miley Cyrus.

This song was one of the top trending sounds on Tiktok for weeks, which led to it hitting number eight on the Billboard Hot 100.

Out of all of the music he’s worked on, the highest-charting single has been “Stay,” which he worked on with Justin Bieber and reached number one on the Billboard Hot 100.

When Laroi raps and sings, most of his Australian accent melts away into an American one. This is due to the heavy influence other music has had on him and his understanding that there’s a need to work for appeal.

This was also a big strategy how Billie Eilish became famous.

In several interviews, he talks about how he wants his voice to be timeless and a jumping-off point to try and make people curious about and interested in Australia.

Citing how Drake was able to make Toronto into a city that’s more internationally known for music, TKL states that he wants to do the same for Australian musicians so that they’re taken more seriously.

He’s able to understand what makes artists popular: and has sampled their styles in creative ways to find his sound.

His single “Without You” may not sound like Sia, but when he was working with his friend Omer Fedi (from such fame as creating the guitar music for Montero by Lil Nas X), he was able to replicate the powerful feeling that you can find from a Sia song.

He understands what makes artists stand out, and without copying them or stealing from them, he’s capable of using their skills for inspiration to help hone his abilities.

Another byproduct of this is he states he wants his sound to be timeless. In many interviews, he’s stated that he tries to lean into American colloquialisms because it allows him to make himself heard.

The Kid LAROI says that he’s influenced by what he’s listened to growing up and that music should change as you grow: but keeping a timeless look is a great way to ensure that your music lasts.

By creating music, like finishing the Addison Rae song when she boosted his TikTok and making music with quickly growing artists and established artists.

TKL has shown a clear understanding of what the audience wants and how far he’s willing to take that.

His US debut album, F*CK Love, opened at number eight on the Billboard 200 albums chart, gaining over 40,000 unit sales. In the UK, it started at number 12 and Number three on the ARIA survey.

These are unprecedented numbers that most aspiring artists wouldn’t get to see.

Marketing In Ways That Haven’t Been Seen

Many people who are unfamiliar with TKL don’t realize that they’ve heard his music already.

His debut mix-tape “F*CK Love” has dozens of songs on it, with several deluxe versions, remixes, and new tracks. Overall, it contains thirty-five songs.

How he’s able to push his songs higher in the chart is a style of marketing and music development that allows him to release several versions of a song which all count as one unit when pushed up the charts.

Constantly updating the album, adding new music and remixes, and releasing it in a staggered pattern has allowed the album to count as one collection on the Billboard’s chart that continues to go up in numbers.

In hip-hop, this became a popular style of boosting an album, with artists like Lil Nas X using it to give their albums more of a boost and increase sales.

Beyond his music, he also sells products to get his brand into public consciousness and allow his fans to show their support.

Ant tons of other items, including teasing that he may eventually release a vinyl. Each of these items is clearly labeled, and sells out immediately.

This means that his brand gets in front of more eyes, and because of his interesting design styles and unique color choices, his fans can boost his music.

His method of growing in popularity and encouraging new artists into his music in the same way that he was allowed onto other’s music as a new artist shows that he has a lot of respect for the system that’s given him his big chance.

The Kid LAROI just recently turned 18, and although he’s achieved more success than some musicians do over their entire lifespan, he’s made it clear that he’s not planning on stopping any time soon.