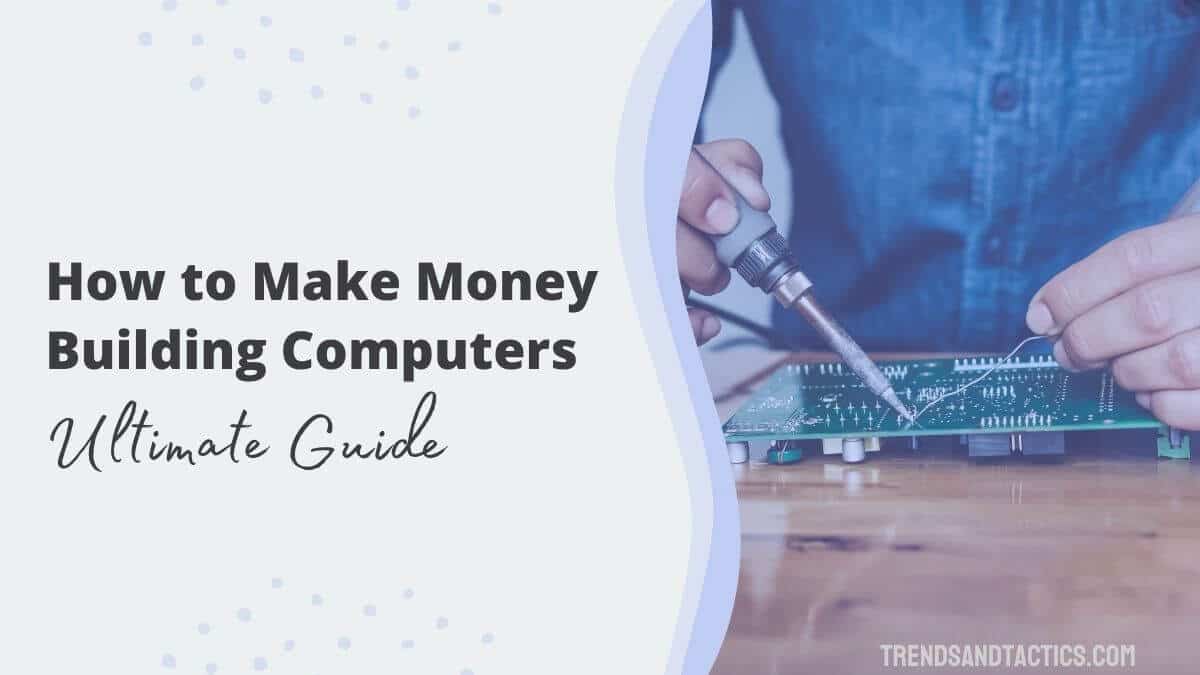 Computer building has been a huge hobby for several years now.

Those who love this hobby have usually built computers for themselves, but what if you knew how to make money building computers?

That’s what we’ll be discussing today, so you know if it’s the right path for you.

Can you make money building computers?

Taking on work as a PC build technician is more possible than ever.

However, it’s important to realize this is usually a hobby for most people, so you shouldn’t expect to make millions of dollars out of the gate from starting to build and sell computers.

That said, gaming computer builds have exploded in popularity, and it’s not uncommon for hobbyists to pour thousands into their rigs.

Over the last few years, sales for PC parts rose by 89%, so ordering parts has gotten competitive. Still, computer parts are profitable things to resell. Gamer PCs are where the largest market is, and specializing in them can give you the biggest chance at an income.

However, to do this successfully, you have to gain a reputation for creating great builds and making computers that people are excited to show off and talk about.

Similarly, buying and selling video games is a profitable side hustle if you’re a gamer at heart. Possible income: depends on the parts you receive

Allowing people to send their older PCs and components to you to recycle will give you a chance to have access to plenty of parts and also play a role in keeping landfills empty.

In fact, recycling old PCs is easier than most people think.

3. Repair PCs on the Side

Repairing PCs is another side gig you can do to supplement the income you can gain from selling custom-built computers.

To do this, advertise yourself as a repairman on local craigslist and Facebook Marketplace listings.

This will allow you to earn extra income while sharpening your skills and gaining traction in the local market. Oftentimes, it’s one of the more popular side gigs for software developers, but anyone can do this through self education.

4. Start a Patreon With Tips and Guides

Patreon is an awesome way for you to make money off your builds besides just the income of selling them.

Showing people how to build their PCs, what tools are the most popular right now, and what parts they should invest in will allow you to create a space where people will pay you strictly for what you know.

You have to work to build an audience for this to work.

Creators on Patreon brought in over $2 billion in 2021 as a collective amount. In addition, science and technology saw a 20% growth in the last couple of years, which means you could have a growing audience there. Although this is the least fun idea for someone who wants to build computers for a living: working directly with a company is your best chance at making a predictable income right off the bat.

To score this job, you do have to have some education or way to prove that you know what you’re doing.

Many people like to sit back and watch other people build or repair items in their free time.

Although it might sound strange, some enjoy the feeling of seeing someone else methodically improve or make things into something amazing, like a great gaming PC.

It can take time to build an audience, and you’ll have to figure out what type of videos work best for you, but this can be an exciting way to gain an income.

Possible income: varies on the price you sell for

When selling, you must get your items for as cheap as possible. The cheaper you buy items for, the more of a profit you’ll be able to make in the long run.

The best way to do this is by getting to know other computer businesses in your area, and asking if there’s anything they’d like to get rid of for cheaper.

This can be a great way to monetize on Twitter if you already have a following.

8. Use eBay as a Reseller

Selling on eBay is an awesome way to get your products into motion: but it’s important to recognize that you need to know how to package everything safely and to ensure every package for loss prevention.

Whether you sell full PCs or you sell repaired and refurbished parts here, the important thing is to keep your rating up.

One way to sell faster on eBay is to price your custom builds slightly below market.

Custom tower cases are a great way to make money: even if you don’t sell a custom computer built into them, a good-looking case can sell for hundreds of dollars.

The best way to get into this is by 3D printing or creating molds to make amazing shapes.

Of course, you’ll need a firm understanding of many surface and shape needs from a PC to get started.

10. Put Together Informative Tik Toks and Grow an Audience

Tik Tok is quickly becoming one of the most popular ways to gain an audience on the internet: so it’s a good idea to at least consider it when trying to make an income.

Make short videos that entertain and will leave people excited to see more from you.

These could be tips on building their PC, where to get the best parts, or which parts to avoid: but it’s all a great way to create an active community.

There are currently one billion active users on TikTok every month: that’s a fifth of all users who are on social media. In addition, most users are engaged in the afternoon in their timezone, making it the best time of day to post.

11. Advertise to and Around College Campuses College students may be known for almost always being broke: but when they spend money, it’s usually on the things that promise them some entertainment.

Advertising on college campuses can give you the chance to gain a huge audience that will want to order or buy custom PCs from you.

Be aware that some may try to bargain on price with you, but you should be clear in your needs.

Selling older hardware as used is a great way to support yourself while building your custom-build company.

Most used items sell for around 80% of their original value, so you must source them at a far lower cost.

13. Create Custom Units For Each Customer

Creating custom computers for every customer is the dream that most builders aspire to.

There’s a desire to be creative and inventive: but you have to be aware this income isn’t extravagant. If you want to live off this type of work, it’s a good idea to supplement it with something else on this list.

How to get started flipping computers?

Getting started in this can feel overwhelming, but there are some things you should ensure you’re set up to sell.

First things first: decide on a computer type to specialize in.

Although this may feel obvious, specializing in gaming PCs will bring you far more money and help you build a brand for yourself than just saying you’ll create any computer.

Avoid buying a ton of computer parts initially; purchase the basics and ensure you have everything from a screwdriver to a magnetic tray to catch pieces.

As for computer parts, having a couple of cases or towers, motherboards, CPUs, and hard disk drives can be a good idea.

Getting your hand on a graphics card or (GPU) is still incredibly expensive and hard to do since the rise of crypto is still beating down the amount of these available.

Because of this, it’s vital that you get these per each purchase unless you find a cheap lot of them.

Whether you’ve built computers your whole life, or it’s a hobby you’re recently getting into, building computers can be a financial boost for anyone!

Start correctly, source your items intelligently, and you’ll be in the clear!