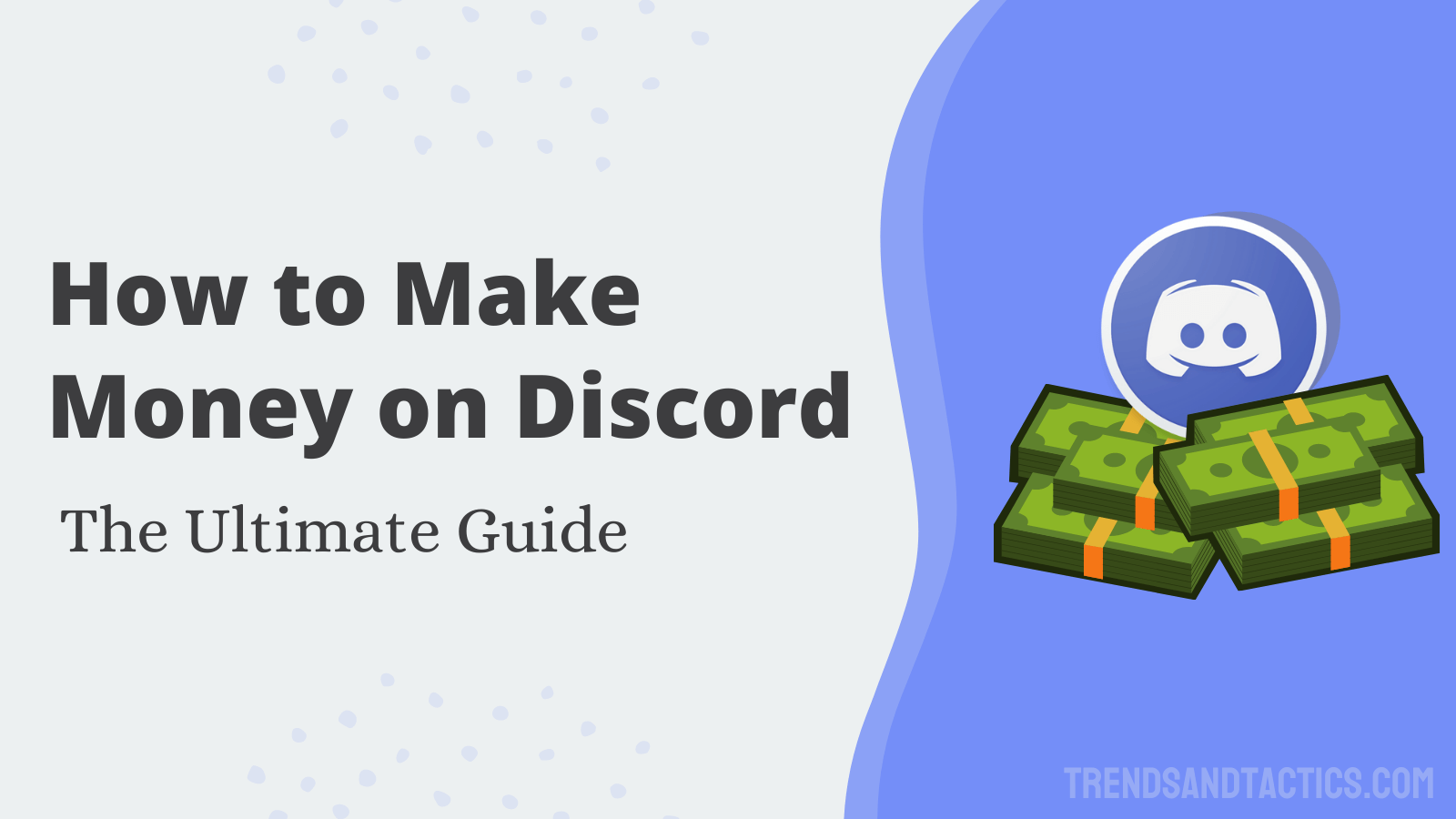 Discord has become extraordinarily popular the last few years, and isn’t slowing down any time soon.

With over 300 million followers, many want to figure out how to make money on Discord with this generally untapped market.

There are tons of options available, so let’s dive into the top ways to earn money on the platform.

Can you make money on Discord? The short answer is yes! Anyone can get money on Discord if they have the drive and time to do so. Some people build it into their full time income, while others keep it as a side gig.

However, it takes time to grow a large community who are willing to spend money on you, or the products you endorse.

Ritesh Verma owns a SAT prep Discord server, and offers this as a community for people to prepare for college tests.

Within six months of starting his discord server, he gained over 3,000 followers.

After six months of running this server, he earned roughly $3,800. Although this isn’t a livable wage, he built up a steady revenue stream that continues to grow.

So if you’re wondering how influencers make money, Discord can be a viable method.

YouTube user Nointro Tutorials makes money by partnering with companies, and working as an affiliate to promote their products.

For example, he worked through NordVPN and received a commission for every signup his community members made through his link.

Nointro Tutorials says that roughly 5% of users buy subscriptions, which earns him about $12 per sub. If you gain a large enough community, this can translate into serious money.

How to Earn Money on Discord (11 Creative Ways)

1. Make Your Server For Paid Members Only

Earning potential: $15 per user per month

If your server offers unique information, like tips on studying as Ritesh Verma does, you can charge for monthly subscriptions so people have to pay to join.

You can utilize bots to boot people who stop their membership, using sites like LaunchPass which automate most of the process.

The information you share through Discord must be up to date and interesting every month. If you stop posting new information for your community, it’ll hurt your subscriber growth and income in the long run.

Many server owners struggle with subscriber growth, leading many to purchase ads to promote their community. If you have a large server of at least a thousand subscribers, you can start earning money from ads.

The most popular place to advertise these transactions is on sites like Fiverr, which allows people to contact you directly for this service.

Have screenshots to show that your server is active, and that the users aren’t purchased. The more users in your server, the more you can earn.

The largest server on Discord right now is a Fortnite server with over 800,000 users, which means their estimated earnings are $8,000 per ad.

3. Keep A Donation or Tip Jar Earning potential: 70% of each donation

As a server owner, you can choose to allow donations in your group. This can be done through bots or add ons in Discord.

Unfortunately, when you receive donations through Discord, you lose 70% immediately.

However, this is part of what keeps the platform running, and is comparable to what YouTubers recieve from their donations.

If you want to get around this, you can link PayPal donation options. With this option though, it takes longer for users to donate, and may discourage them from sending money.

4. Get Sponsored to Run Advertisements

There’s no set prices for Discord influencers, but payment rates stay fairly close to influencers on apps like Instagram or Twitter. Of course, the more followers you have, the more money you can make.

The nice thing about advertisements, rather than affiliate marketing, is that you get a flat amount of money no matter what.

But this does create a limit on how much you can earn from your advertisements. So if they do really well, you won’t make more money despite the advertising company earning a larger payout.

5. Become an Affiliate and Market to Your Server

Affiliate marketing is a great way to test how active users are, and how many are willing to make a purchase.

This type of marketing is all over social media, from Instagram to Youtube, and is only recently hitting Discord.

Affiliate programs allow you to offer a discount to users, and those who purchase through your links result in a commission for every completed transaction.

The best-known brands that do affiliate marketing are NordVPN, SquareSpace, and mobile game platforms.

The more active your user base, the more money you can gain with this method.

Earning potential: $1 to $20 per user per month

Patreon is a large source of income for many creators. However, you should know that they take 5%-12% of your earnings, so the final payout will be discounted slightly.

You have to sell the value of your Patreon offerings, so people are willing to make monthly commitments. Depending on demand, it’s possible to earn tens of thousands of dollars per month on Patreon.

7. Use Bots for Tipping

If you don’t want to go through a donation link or lose 30% of your tips to Discord, you can use a bot like Donate Bot instead.

The most you’ll have taken out is a transaction percentage from PayPal, but that’s mostly unavoidable regardless of the method. Users only have to type ‘/donate’ for this function to work.

8. Host A Site Where You Sell Tutorials and Guides

Earning potential: $1 to $29 per purchase

If you have skills that are unique enough to build a community around, consider selling tutorials on the side.

You can do this by writing and self-publishing e-books, or creating tutorial videos that people pay to access.

The more unique your skills are, the more likely you’ll find a niche audience who’s interested in purchasing.

9. Get Your Long-Term Projects Funded Via Kickstarter or GoFundMe

If you have an active community, then you might be able to crowdfund projects you’re working on.

Although it’s not guaranteed money, if you have an interesting concept for a project and an active community, you’ll probably get some backers.

Projects must be something that aligns with your community, or is going towards a charitable cause.

Otherwise, they could feel like they’re being taken advantage of, and possibly leave your community altogether.

10. Offer Paid Channels in Your Discord

Earning potential: $5 to $30 per user per month

Although this is similar to having a fully paid server, allowing most of your server to be free with some locked channels can be a better option sometimes.

It’s the same model 99% of free apps use today. They get people in the door for free, and then offer ways to improve the experience for a price.

This idea would work great for someone who already has a massive server, and doesn’t want to overall it to start making money.

If you’re talented at growing communities, but aren’t interested in maintaining them, this could be a good fit.

Avoid building servers around your personality, because it causes massive amounts of people to leave the group if you leave.

You can sell your server on multiple sites (like Player Up), so shop around and find one that you trust.

Although the term influencer has become unpopular in recent years, monetizing a Discord server follows the similar influencer playbook used on other platforms.

So, don’t get discouraged if money isn’t rolling in right away, building a quality community takes time, but it’s worth it.