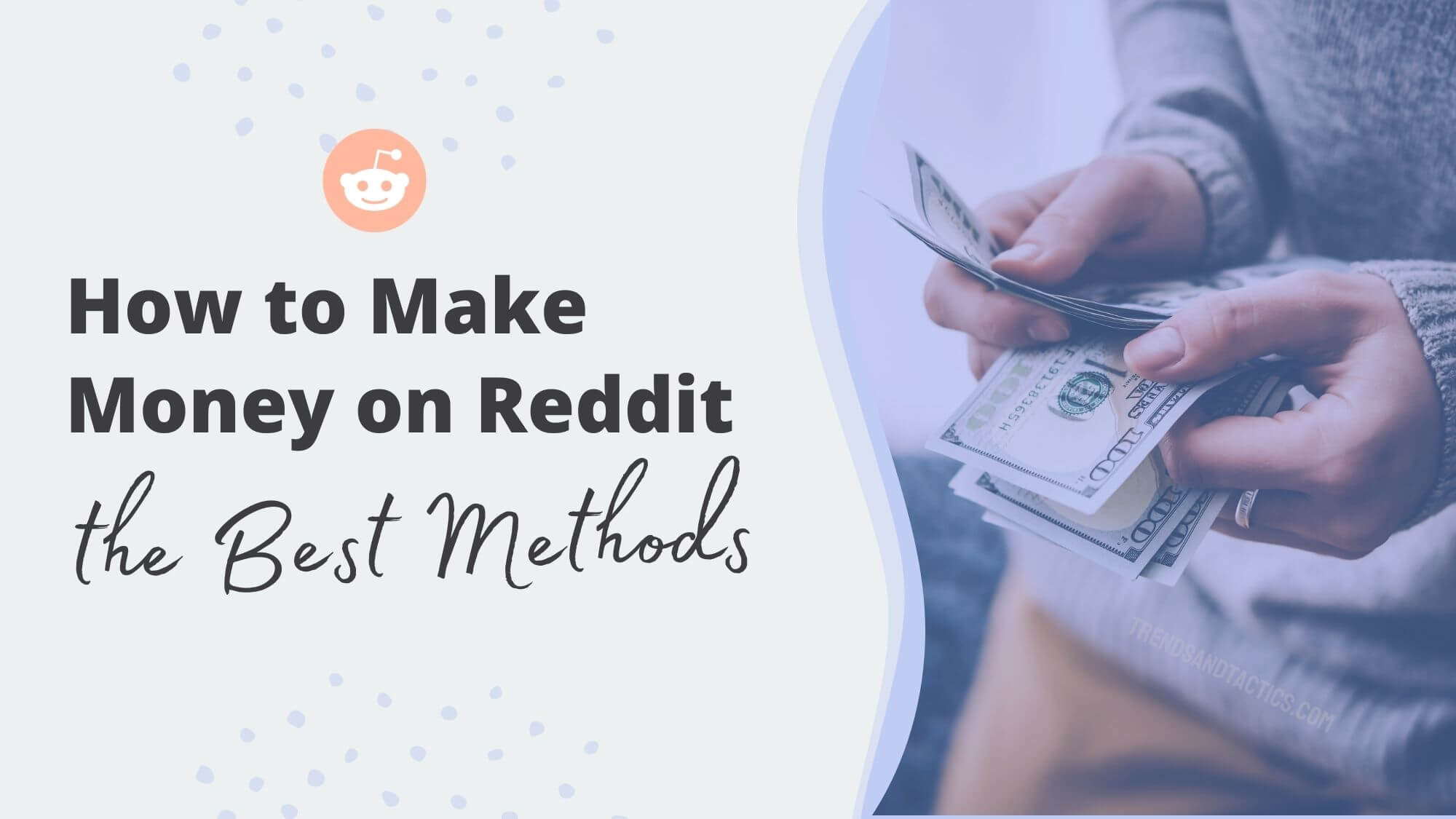 The average Reddit user spends at least 10 minutes on Reddit whenever they log onto the site, and it’s made a name for itself as the tenth most popular social network in the USA.

With a growth of around 30% every year, it’s no surprise that there are entire networks of people trying to learn how to make money on Reddit.

How feasible is that, though? If you can’t think of ways to make money on Reddit, don’t worry, there are tons!

These are some of the top ways to make an income through this awesome site.

The short answer is “yes, absolutely“. There are dozens of ways that you can make money on this site.

User TheModestMan has been able to build an income of over $10,000/month by using the subreddit r/Entrepreneur to lead traffic to his blog.

In addition, he sells affiliate products like socks, watches, and wallets there and makes an income from the advertising revenue from people visiting his blog. This is also an effective strategy how to make money on Twitter.

Although this would be hard to replicate, and many people have tried, it shows that it’s more than possible to make money this way.

More feasibly, user Goldeneye0242 was able to make just over $3,000 from gigs he found on r/BeerMoney.

Driving for food delivery apps is a popular example of gig work, which is great for someone who wants flexibility in their work schedule.

These are wildly different amounts of money, but the ways these users made this cash can be very effective when used by the right person.

Although Redditors are notoriously difficult to advertise to, you can monetize your SubReddit, as long as you’re the person running it.

This means hosting ads and affiliate links on multiple portions of your subreddit so that users will want to click them to support you.

Some even include donation buttons if they’re offering a service that other users find useful.

Income from this source can be hard to gauge, but it’s mostly placed on how much you offer them when they’re a part of your community.

The most common users to gain income doing this are those who offer life or fitness advice, artists, influencers, and companies that allow for free digital downloads of their goods.

It can take a while for a subreddit to gain enough traction where you can make money off of it, but it’s worth it.

10. Referral Links on Some SubReddits

Earning potential: $15 to $300 per purchased referral

Referral links are when companies partner with influencers or affluent users to drive people into purchasing from the company.

The most common examples of this are SquareSpace, Honey, and Shein.

You can pick a company you’re interested in, and reach out to them to see if they’re willing to work with you. Some even have web pages dedicated to affiliates.

Be aware that you can’t post this affiliate link in every subreddit since many will ban you for it.

Read the rules of any subreddit you join, and pay attention to your actions to avoid spam or upset the moderators. This can be a great way to make a passive income. If you want some extra money to spend at the bars on the weekend or a couple of extra bucks to go towards your fuel costs, r/BeerMoney is the subreddit to visit!

The community works to ensure that multiple small gigs and job openings are listed every single day. Small gigs are great second jobs.

This could range from online surveys to paid reviews and dozens of other ways to make some money.

As mentioned earlier, user Goldeneye0242 was able to make just over $3,000 in a year on this subreddit, meaning he made around $60 a week.

This could be useful for groceries, help you cover your car payments, or even be a great way for students to make extra spending money while they’re in college. Although it’s not much: it’s enough to be useful!

8. Advertise Your Skills on r/ForHire

If you want a more steady source of income or want to make the work you find on Reddit your main cash flow: r/ForHire is a fantastic community.

Unfortunately, you’ll have to compete with over 145,000 users, but there are jobs ranging from graphic design to website development that can be useful for nearly anyone.

It can take some time to cut your teeth on this subreddit, but if you pay attention to the types of jobs that you’re interested in and have a good resume ready, you’ll be able to find work that suits you.

The great thing about this subreddit is that you can also advertise your skills and abilities so that employers going through the subreddit will be able to find you and possibly hire you.

7. Promote Your Business Through SubReddits

Earning potential: based on your company and ability to advertise

Although self-promotion is generally frowned upon, you can still find ways to advertise your company as long as you do it naturally in conversations.

Whether you are starting a wildlife photography business or growing a mobile detailing business, online communities are a great way to connect with potential customers. This means offering advice and linking to articles that may be on your company’s blog or linking your information on the main portion of your site.

Avoid linking your products or services directly, as this could get you banned from many subreddits and can ruin your reputation on the site.

Although this may seem like a slow play, doing it well can score you a lot of traffic on your site, like what user TheModestMan has experienced.

Earning potential: averaging around $50,000 a year

Many official brand and celebrity accounts are run by someone hired to fill the role and use the name as a type of advertising.

Much like what Wendys does on Twitter, your job under this position would be to reply to things in the same mood as the company or celebrity’s personality and garner attention through this.

Some companies and celebrities would require you also to run their Twitter, Instagram, and possibly TikTok accounts, but that depends on what the company asks of you.

Nevertheless, this can be an excellent source of income and allows you to play around on social media for most of the day.

Be aware that there are NDAs most of these personalities would have you sign, so it’s not a job where you’ll get to be yourself or tell someone who you work for.

This is the elusive job that so many Redditors wish they could have. Working as an admin for Reddit means you oversee the site, ensure it’s running well and that moderators and subreddits are following guidelines.

Of course, you can still interact in subreddits, but when you’re working, your main job is to either troubleshoot site issues or develop solutions for systemic problems.

This could mean being part of the decision team that closes down a subreddit for good or having to take part in deciding which users get permanently banned and restricted from the site.

It’s not as fun as just hanging out on Reddit, and although it’s a very high-paying role, it requires a lot of your attention and understanding of how the site functions.

4. Find Jobs That Allow You To Work Online at r/WorkOnline

Much like the r/BeerMoney subreddit, r/WorkOnline is a job board on Reddit that focuses on connecting job seekers with positions they want to fill.

The kicker is that this subreddit is entirely dedicated to helping people work online instead of in person.

The jobs range from transcription work to website development and product testing, so don’t shy away from trying some of these available positions if you’re interested in them.

Another perk, online work almost always offers jobs without uniforms which means working in your pajamas can be a reality.

Unfortunately, this subreddit has seen its share of scammers: so when you apply to roles, make sure you don’t click any suspicious links, you read all documentation carefully, and that you don’t give out any financial information besides how they can send you money directly through PayPal, Venmo, or CashApp.

Some employers are moving to pay workers in crypto. Although this can be frustrating to some, for others, it’s freeing since it allows them to accept the same payment regardless of where they or their client lives and works.

These jobs are generally web development, design, and creative work- but you can find almost anything on this subreddit if you look for it.

It’s important to be aware of how much cryptocurrency can change in value, so payment that’s high, seeming one day may seem low the next.

Keep up to date on these fluctuations to ensure you’re not underpaid for the work you do.

2. Join In With r/WallStreetBets

Earning potential: depends on the market

This can be considered gambling by some, so if you’re not willing to risk your money, this isn’t going to be a good option for you.

Instead, the r/WallStreetBets subreddit walks users through how to make money on the stock market, what stocks are good to buy, and which would be better if you sold.

This community works hard to avoid anyone entrapping others into making a big financial mistake, but it’s easy to get caught up in the moment and spend more than you’re realizing.

Please pay attention to how much money you invest, set a budget for yourself, and know when it’s time to take your money out. If you can’t afford to lose any money: this isn’t an option for you.

1. Create A Community For Your Brand

If you can create a personality and community around your brand: you’ve scored the best way to make an income on Reddit.

This creates a niche where people will feel like resources are limited and will be more willing to spend money on your products.

It’s important to keep in mind that building a community like this can take time, and although it would be nice if we could all make $10,000 a month as TheModestMan did by creating his own subreddit: it’s not possible for everyone.

What Red Flags Should You Avoid?

Unfortunately, there have been scams that users should avoid if they want to make sure they make money instead of losing it.

If a job listing looks too good to be real or requires you to give them your financial information: don’t trust it.

Although we have to give our financial information to our corporate jobs, these are companies we trust and recognize. Giving that information to an unknown person can lead to your account getting emptied.

Therefore, it’s a good idea to require all payments through Paypal, Cashapp, or Venmo until you’re more comfortable with them.

Some people posing as brands have offered to buy high-ranked accounts for advertising, but when people hand over the accounts, they quickly realize they’ve been scammed, or the payment didn’t clear.

This can lead to a loss of years of hard work on an account, which is hard to regain.

In general, don’t trust strangers with any information that you wouldn’t post publicly.

Although it’s rarely possible to get paid directly by the company itself, finding work and doing gig work through Reddit can be an awesome way to make money.

Regardless of whether you’re new to the site or you’ve used it for over ten years, consider some of these options as a future source of income!