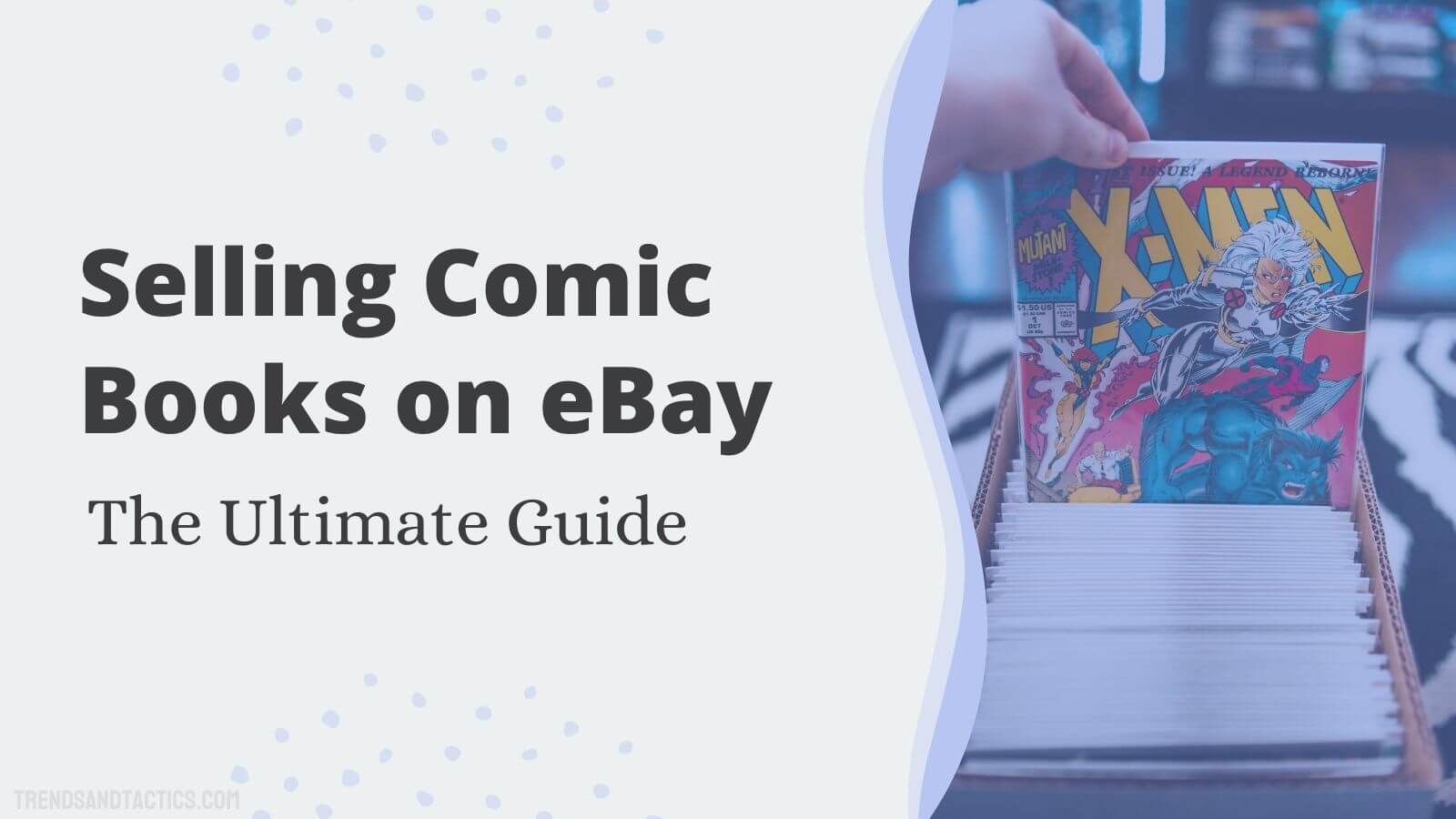 Most people have comic books laying around their house collecting dust.

Others have collected and preserved them for years in pristine condition.

Learning how to sell comic books on eBay is a good way to get rid of these comic books and make some great money!

Selling comic books on eBay can be quite profitable. In fact, Action Comics #1 sold for a record $3.2 million on eBay in 2014.

Here’s a step-by-step guide of how to sell comic books on eBay.

1. Know the Value of the Comic Books You Have

The first step in learning to sell comic books on eBay is understanding what you currently have in your collection. It’s important that you organize all of your comics, writing down the titles and issue dates of each as well as the condition the comic book is in.

Then, you need to come up with a true objective value for each of these comic books before you list them.

While some of these might hold more value to you than others, that’s not important. What is important is what the comic books would return to you on the open market.

So how do you price used items, or new comics for example?

There are a few resources you can use to do this research before selling comic books on eBay. The first is called the Overstreet Comic Book Price Guide.

For years, this has been considered one of the most accurate predictors of values of comic books.

There are some issues with this source, though, so you should also cross-reference other sources.

You can get a base price for your comic books online at comicspriceguide.com.

You can sign up for an account ton their site for free, but you’ll also have the option to upgrade to a paid membership, which might be valuable depending on how many comics you intend to sell.

Finally, you can go straight to the source and simply search eBay to see what your comic books, and other similar ones, are going for. This is perhaps the best tool for determining the objective price of the comic books you have.

To to get the most value from your comics, make sure to utilize the best strategies to reduce eBay seller fees.

The title of the comic you have determines the price, but so too does the condition of the comic book. That’s why it’s important you do what’s called “grade” your comics.

The grade on comics basically refers to the condition that it’s in. This can be a very subjective exercise, but there are resources you can use to help support the grading.

First, check the eBay forums for some information on this. You can also reference the Overstreet Grading, which is typically considered the standard in the industry.

There are also other sites you can find online that will help you determine what the grade of your comic book should be, based on various features of your comic.

If you have a really outstanding comic you want to sell for top dollar, you can also send it away to the Certified Guaranty Company, which will place a definitive grading on the book.

This will give the grading process some objectivity and more weight as you’re selling comic books on eBay. Considering comic books are one of the best things to resell online, grading them is pretty common.

When you’re learning how to make money on eBay, you’ll quickly figure out that the listings that sell the best have eye-catching photos. This is a huge key to selling comic books on eBay.

Buyers don’t want to rely on just your description of the comic book when they’re browsing listings.

They don’t even really care about the grading of the comic book, even if it’s professionally graded … unless, of course, it’s backed up with high-quality photos.

Most smartphones have excellent cameras nowadays, so you should have no problem taking quality photos of your comic books.

You should do some simple Google research on how to take the best photos when you’re learning to sell on eBay.

This information will help you take the best pictures possible of your comic books that you’ll then include with your listing.

When you can prove that the comic book you are describing is what you actually have on hand with a picture, you’re more likely to sell that comic book quickly and for a high value.

4. Time Your Sales Around Movie News

Some comic books sell much better than others do. That’s why it’s important to do your research to see what sells before thinking all your comic books are going to sell for top value.

One thing to keep in mind is that movies that feature characters from DC and Marvel have increased the popularity in comic books, which has increased the value in some of these comics.

Savvy people who are selling comic books on eBay can time their sales by seeing what information is out there regarding future movies. When DC and Marvel release new movies with new characters, people often rush to purchase old comic book titles that feature those characters. This, then, increases the value of these comic books in that time period.

Here are some things you can do to stay ahead of the game here:

One thing to keep in mind is that full runs of comic books that have 10 or more issues tend to result in quicker sales for a higher price. If you have one of these full sets, strongly consider selling them all together rather than breaking them up into individual issues.

If you are only one or two issues away from completing a full lot, try to purchase what you’re missing on your own. Then, take this new complete set that you have and sell it all together. Your return on investment with this could be significant when you’re selling comic books on eBay.

We hit on this point briefly already, but it’s worth mentioning again in its own section. You can use your knowledge of comic books to purchase some now with the intention of selling them for a higher price later.

Many people who learn to flip comic books online will turn this from a side hustle to a great second job.

This process works in reverse order of what you’ve done to this point.

Your previous research that you’ve done on your own comic books will give you an idea of which comic books — or which characters — sell for the best prices.

As you’re doing research for the comic books you’re going to sell, take notes on some other ones you’d like to sell at one point. Then, make note of how much these specific comic books sell for.

Once you’ve have the end sales price noted, then you can actively search for these comic books so you can purchase them with an investment in mind.

A lot of times, you’ll be able to find comic books well below the market price. Buying from flea markets can be a great option as well.

As a savvy comic book seller, you’ll know which investments are good and which ones are not.

You can take advantage of the fact that some people just want to get rid of the comic books they own if you know what they’re actually worth on the open market.

Anyone can simply list a comic book for sale on eBay. And, depending on the comic book and the list price, anyone can be successful in selling comic books on eBay, too.

But, if you’re looking to make top dollar for your comic books, here are three tips you should follow:

A big key to being successful selling comic books on eBay is having your listing sell the first time.

This allows you to avoid having to re-list items, and pay fees a second time. This is why you should research what comic books sell, and which ones don’t. The ones that don’t shouldn’t even be listed.

Again, you can make more money on eBay if you list for sale comic books that are in the news.

When Marvel or DC announces a new movie, those characters in it become very popular.

You can make more money selling comic books on eBay when you time your sales around these announcements — and then mention the new movie in your listing.

eBay allows sellers to set a starting bid and a reserve price. When you want to learn to resell comic books for top dollar, you’ll find out that you want to encourage more bids.

If you set the starting bid too high, you may discourage people from ever bidding in the first place.

But, you can protect yourself from this low starting bid by setting a reserve price that will guarantee you a certain sales price.

Is eBay a Good Platform to Sell Comics?

Now that you have learned how to go about selling comic books on eBay, the obvious question is whether it’s even a good platform to sell comics in the first place.

The answer to this question is yes, but with some exceptions.

Second, know that eBay will take fees from you for selling comics on eBay. Therefore, you need to factor in this cost, and any cost of withdrawing your money, when you’re considering your listing.

If the sales price of the comic book won’t allow you to make a big profit, it might not be worth it.

All in all, though, eBay is a great platform for selling comic books. There are loads of people browsing eBay every day looking for comic books to purchase.

This makes it a perfect spot to market your comic books for sale.

There are some nuances to it, but that’s the best way to sell comic books on eBay for a good profit.