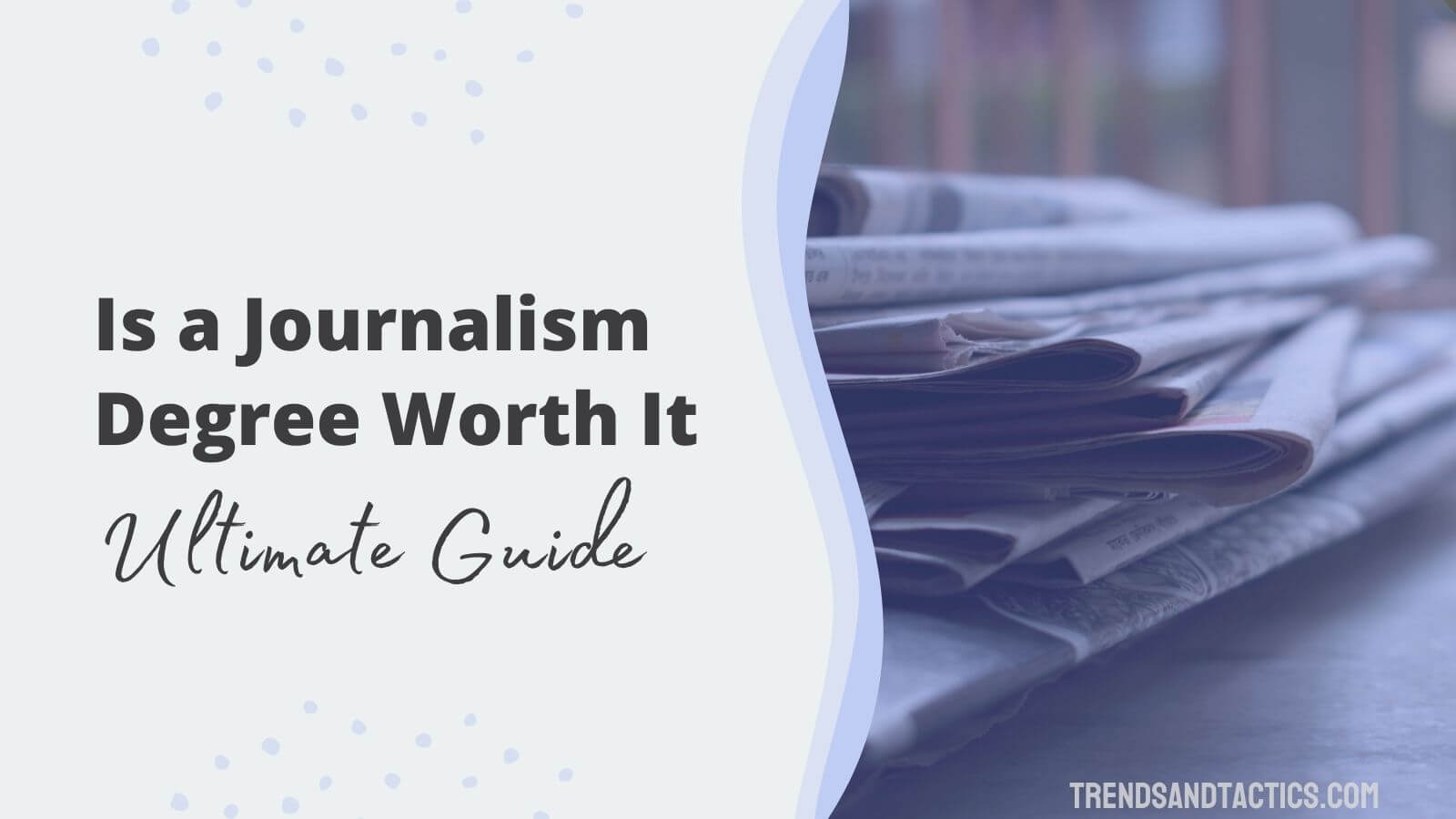 If you’re considering a career in news media, you may be asking is a journalism degree worth it.

This is a very pertinent question to ask, as you certainly want to find out how to make money with a journalism degree before you decide whether it’s the best avenue for you to take to reach your career goals.

There are some advantages and disadvantages to getting a journalism degree, which we’ll outline below with some of the following major points.

Pro: Skills Translate to Many Jobs One of the biggest pros to a journalism degree is that you’ll learn a huge set of skills that will translate very well to other industries.

Even if you don’t decide to pursue a career in journalism, you can use the skills you obtain while you get your journalism degree in other fields.

This applies to just about every career you would want to pursue.

Some of the skills you’ll learn include

Is journalism a good major for future lawyers? Yes, it is. The basic skills that you’ll learn as you obtain a journalism degree are very pertinent to those you’ll need as a lawyer. Then, you could go to law school to hone your law-specific skills and background and specialize in one of these top paying jobs for lawyers. Major changes to an industry can ultimately result in a high demand for jobs or a decrease in demand for them.

Luckily, journalists have always been in high demand — no matter how much news media has changed. This makes it easier to get jobs that makes 6 figures out of college.

From print, to radio, to web, to interactive, companies are always looking for qualified journalism majors.

This is a huge positive to getting a journalism degree: You can rest assured knowing that companies around the world will always be seeking out people with the skills and knowledge you’ve obtained.

Journalists are indeed in high demand. In fact, the U.S. Bureau of Labor Statistics expects the job outlook for the industry to grow by 6% by 2030, which is quite fast compared to other industries. So, majoring in journalism now could pay off later and even open doors to jobs that pay over 300k a year.

One of the best parts of getting a journalism degree is that you’re going to get the opportunity to learn directly from experienced journalists — rather than just full-time professors.

This is something that makes good journalism schools quite different from other schools at colleges and universities.

In an ethics course, for example, you might be learning from an adjunct professor who literally shows up to class directly from doing undercover investigative reporting on the drug trade in an inner city for a major regional newspaper.

The type of information that you can glean from professors like this is unmatched in almost any other major, and they will be sure to share tips for finding a job from their first-hand experience.

So, if you choose the right journalism school, you know that what the professors are telling you in the classroom will match up with what’s going to happen out in the “real world” once you graduate.

Good journalism schools are hooked in with the local community in a very big way.

They partner with media organizations big and small, of course, but they also help their students make connections to the people who are leaders in the industries they are interested in covering.

Some of the best journalism schools near Washington, D.C., help their students get internships on Capitol Hill, for example.

The ones near New York City connect their students with sources on Wall Street and at major financial firms.

When you get a journalism degree, in other words, you aren’t just getting classroom experience.

You’re getting diverse experience in the real world from a very young age, which only helps you mature quickly and be a better job candidate when you graduate.

Not a lot of other majors will do this.

If you’re planning on getting a journalism degree, you should be very passionate about getting as much experience as you can. Don’t just volunteer for the student newspaper. Attend as many seminars as you can, learn from experts in the field, and ask your advisors for help connecting you with whatever resource you’d like.

One thing that many new journalism graduates recognize immediately when they apply for their first job is that employers are not just interested in where they got their degree.

They want to see a significant amount of experience, even if it’s your first job post-college.

Some industries will simply look at the degree you’ve earned, where you earned it from and then hire you based on that and your interview skills. This is not the case with journalism.

In other words, getting a journalism degree by itself is relatively worthless.

If you’re not also working hard while you’re in school getting experience at relevant part- or full-time jobs, internships and volunteer opportunities, then your degree may not be worth much.

Ways you can get that experience: A major con to getting a journalism degree is that, if you end up going into journalism as a career, you won’t be paid very well — especially at the beginning.

This is something you need to consider as you’re weighing the financial costs vs. benefits of getting a journalism degree.

The pay for journalists has traditionally been less than that of other industries. As of April 2021, the average salary for a journalist was $42,390 annually, about 17.2% lower than the median national salary. So, don’t expect a huge payday when you start off in journalism.

Con: Need to Gain Other Knowledge

If you’re asking is a journalism degree worth it, you should consider that you’ll need to gain other knowledge beyond just the degree itself to be successful in your career.

When you graduate with a journalism degree, you’ll be well-equipped with writing, communication and critical thinking skills, among many others.

For example, if you start off as a local news reporter for a small newspaper, you’ll probably be asked to cover local meetings at city hall.

At these meetings, you’ll be faced with topics such as ordinances, zoning, planning, utilities and taxes.

Journalism school isn’t going to give you much of an education on this, and many other topics that you’ll instead have to learn on the job.

In other words, your education won’t end once you leave the classroom.

Con: Other Degree May Be More Pertinent to Job For example, if you want to report on politics, it may be better to get a political science degree along with a minor in creative writing or English.

This would give you the background and essential knowledge of the American political system, while also preparing you to learn how to write and communicate.

If you want to be a reporter in Spain, as an example, it might be better for you to get a Spanish degree than a journalism degree.

If you get a journalism degree instead, you’ll still have to learn how to speak Spanish fluently — and how to communicate using the language in many different ways.

Essentially, it’s not a requirement to have a journalism degree to get a job in journalism.

If you’re wondering how to make money with a journalism degree, some of the above pros and cons of getting a degree in journalism should help.

Weigh these pros and cons, and apply them to your own situation before deciding which educational path to pursue.