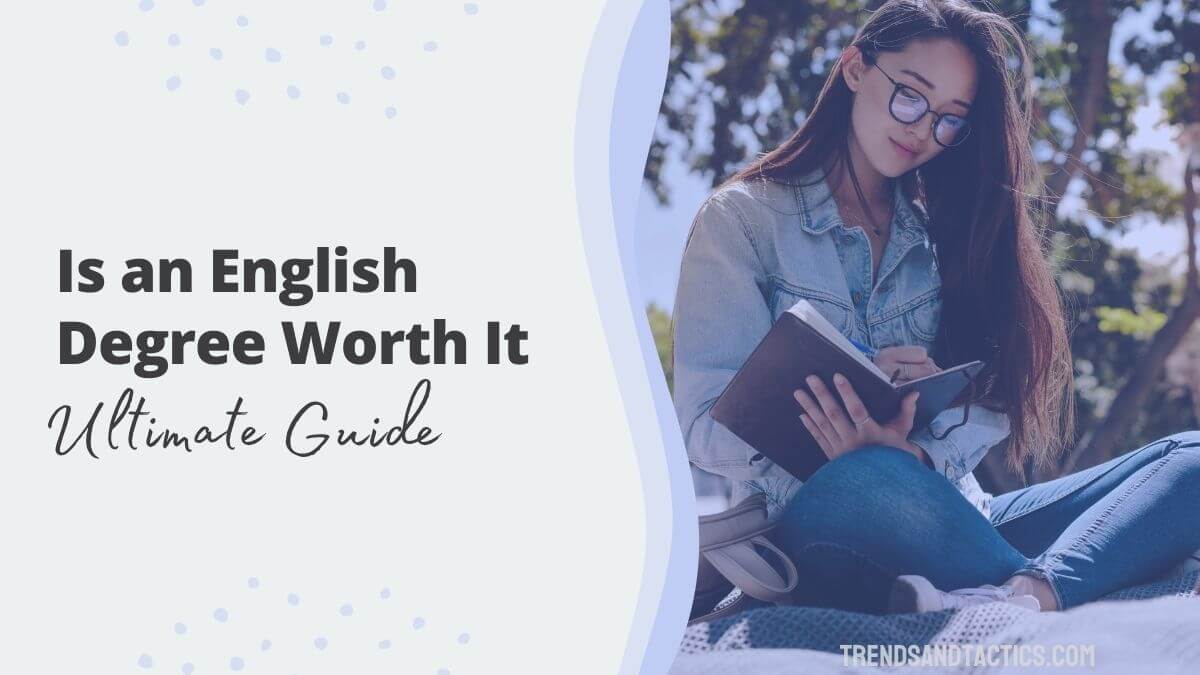 Is an English degree worth it? That’s a question that many students ask themselves.

For some students, like me, the answer is an obvious yes – but for others, knowing how to make money with an English degree (and how to be successful in general!) is a bit more complicated.

In this post, I’ll tell you about some of the biggest pros and cons of an English degree so you can decide for yourself whether it’s worth it.

If you love words, English is the perfect degree.

You’ll not only be able to read works of literature from around the world, but you’ll become a more cultured individual who’s better able to relate to people on a personal level. This can come in handy when learning how to negotiate a job offer.

And don’t forget about the writing! This was something I found to be the most valuable about an English degree.

As someone who loves to write, pursuing an English major was a natural choice. I knew I wanted to continue to build my skills as a writer, so an English degree was the best choice.

Choose classes – or even concentrations – in your English degree that will allow you to pursue the areas you love most. Interested in studying literature? Take literary analysis classes. Want to teach English? Minor in 7-12 education. There are plenty of options.

Pro 2: The Career Versatility is the Best Is English a good major? Absolutely – especially if you want a lot of versatility in your career.

Those are just three of the job titles I’ve had since graduating with my English degree – and I have English major friends in just about every industry, including business, media, publishing, law, and much more.

Find out what type of lawyers make the most and see how an English degree can help you in that field.

Here are a few common career paths for English majors:

You don’t have to decide what you want to do right now – an English degree will provide you with the versatility you need to keep your options open.

After getting a bachelor’s degree in English, you may want to consider a master’s degree in your area of interest. For example, many students go to law school or get their MBAs after earning English degrees. Your undergraduate degree in English will just form the framework – you can build on that framework with additional education later on.

Pro 3: You Can Make Decent Money

An English degree offers decent earning potential. Many candidates pursue careers in media and communications and have an average salary of $61,310, according to the Bureau of Labor Statistics.

Many candidates earn even more than that – or can set their own rates. As a freelance writer, my current advertised hourly rate is $100 an hour – and I have the freedom to set my own schedule.

It is even possible that you can get a job that makes 6 figures out of college.

Yet another perk of being an English major!

The Bureau of Labor Statistics expects a 14% job growth from 2020 to 2030 for jobs in the media and communications sector. This is much faster (almost three times as fast, in fact!) as the national average for all jobs. Translation? You won’t have too much trouble finding work as an English major!

Pro 4: You’ll Have All Kinds of Transferable Skills

While some employers might not initially see the connection between an English degree and the job you’re applying for, the good news is that you have the skills in persuasion necessary to show them how you are the best candidate for the job!

As an English major, I’ve applied (and been offered) jobs as a marketing director, human resources professional, youth advocate, and many others.

You may even be able to talk your way into making money with art skills if that is another passion of yours.

A lot of people claim that English majors rarely use their degree – but did you know that only about 27% of college graduates have a job directly related to their degree? Talk about a moot point!

Con 1: You May Have to Take Additional Classes in Another Field

As an English major, you’ll be a jack of all trades and a master of none, as they say – unless you choose to take special courses or concentrations in your area of interest, as I mentioned earlier.

The following careers all require additional training past the baccalaureate level if you want to land and keep a job:

Con 2: You’ll Read All the Time Depending on how you look at it, this next point could be both a pro AND a con.

I enjoyed being an English major because it gave me the opportunity to take a deep dive into some of my favorite texts.

Yet at the same time, I didn’t always love the texts I was assigned – my British literature class was the bane of my existence!

You’ll certainly do your fair share of reading as an English major, which is something to be considered, especially if reading isn’t your cup of tea.

As a natural introvert, it was hard for me to deal with smaller English classes where speaking up and participating was part of the class grade.

Although I had no problem paying attention and completing the assignments for class on time, I wasn’t a huge fan of talking in front of my classmates about the texts we were reading.

I was the type of English major who became an English major for my love of reading and writing – not necessarily because I wanted to engage in hours-long monologues about the merits of a certain author’s use of metaphor.

This was a major con of being an English major, in my opinion. While many of my friends in other majors were able to hide in classes that were 200 students plus, I rarely had more than a dozen students in my lectures.

As an English major, there’s a good chance that people will regard you as highly creative, highly passionate, and highly intelligent – but many will fail to take you seriously.

When I told people what my college major was going to be, I got a lot of laughs, a lot of scoffs, and a lot of concerned looks directed toward my parents.

As an aspiring English major, there was a good chance I was going to wind up unemployed or underemployed – was there not?

Although that’s definitely not the case – in fact, all of the English majors I graduated with are very successfully and gainfully employed – there’s a misconception out there that English is a useless degree.

Most people assume earning an English degree is easy – all you do is read and write and never take exams!

That certainly does sound easy – unless you actually look at the course load of an English major.

At one point during my junior year, I recall writing three or four papers a week and reading around 50 to 100 pages (at a minimum) each night for class.

Being an English major is no joke – but unfortunately, it doesn’t always get the respect it deserves.

So, is an English degree worth it?

The answer to that question depends on a number of factors, but if you want to be a well-rounded individual with strong communication and critical thinking skills, an English degree can give you the foundation you need for lifelong success.