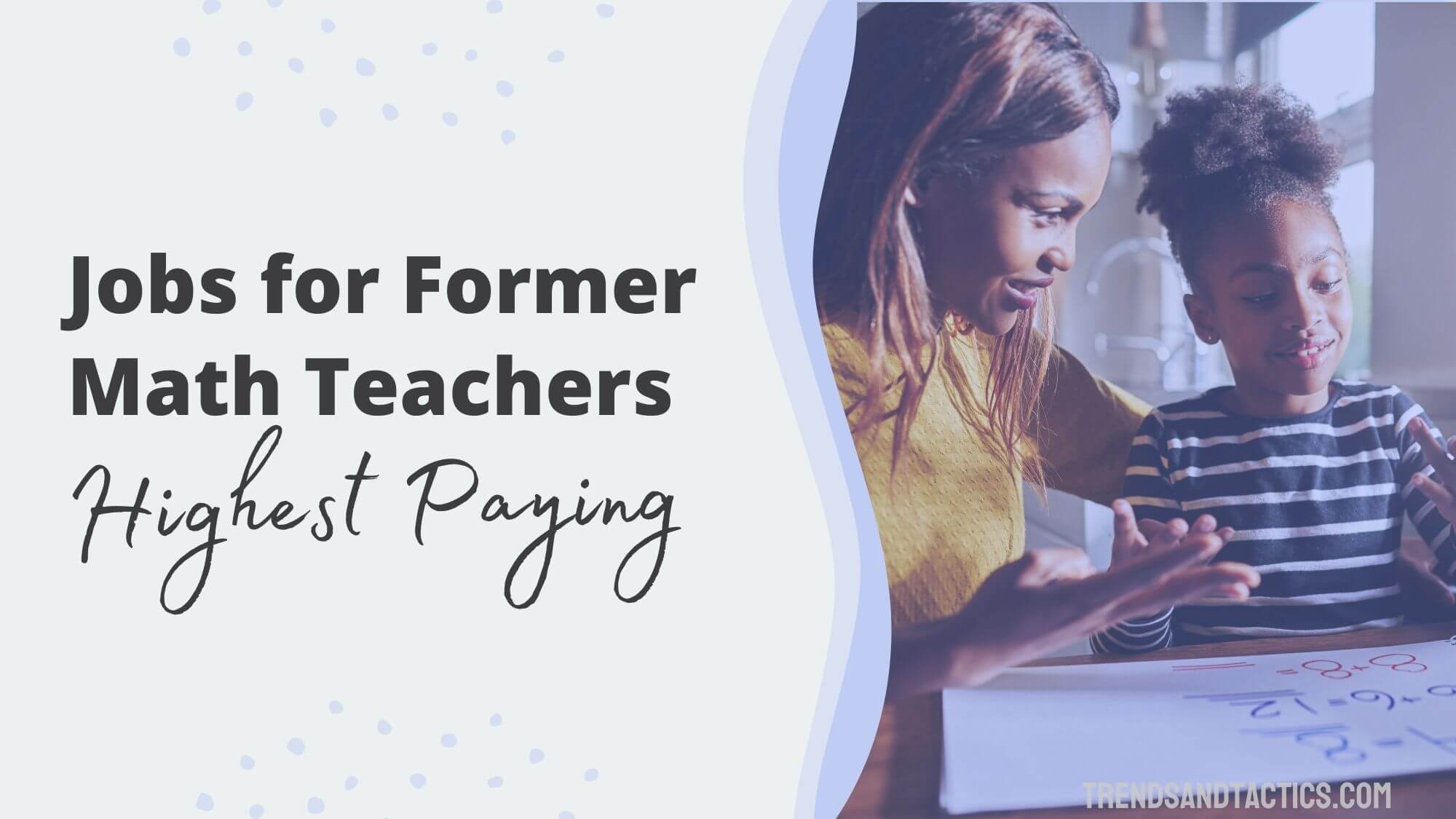 Teaching is a difficult job both financially and emotionally; many teachers get worn down and decide they want to quit and start another career sooner rather than later.

This is seen the most in people newer to the teaching profession since they’re far more likely to get burned out and seek jobs for former math teachers.

Fortunately, instead of feeling lost without a career path, there are plenty of jobs for ex math teachers. This may be the lowest paying job on this list of careers for ex math teachers, but it still makes $30,000 more a year than the average math teacher position!

As an operations research analyst, your main role will be to advise managers and decision-makers on the correct course of action to solve a problem.

Working in this role as a teacher means you’ll have experience working with large groups of people, and presenting your ideas in front of them will be easy to do.

Unlike many careers, this is also a job without uniform requirements, so you’ll get to be comfortable at work.

If you’re going from a math position to a role as a social scientist, the field you’ll want to specialize in is economics. Working in this position, you’ll research the link between economics and finances and human behavior.

This means studying past events and lifestyles to modern life and relationships between different nations, cities, and beliefs about the economy.

Previously working as a teacher means that you’ll be perceptive about human nature and understand the need for people to understand where we’ve come from and how money affects our lives.

It’s a common way to make money with a biochemistry degree as well, since folks with that background also have strong analytical skills.

This role is fantastic for teachers because it puts you in an authoritative position and allows you to counsel people into making better decisions, which is what a lot of teaching can feel like.

As a personal financial advisor, you’ll look at the financial needs of your clients and help them make hard decisions on investments, taxes, and insurance.

Not only will you have to help them plan for long and short-term goals, but you’ll also be there every step of the way as their financial problems are solved.

This can be a rewarding goal and needs your experience in math to succeed. Considering mathematics is a high income skill, this is great way to cash in your skills.

Taking a job as a meteorologist from teaching may feel strange, but you need a bachelor’s degree in math to be able to do this job!

In this role, you’ll use scientific and mathematical principles to observe, understand, and explain or forecast the atmospheric phenomena that affect life here on Earth.

This takes some training, but you get to analyze the relationship between the weather and other environmental processes and consider its impact on life here on Earth. It’s an interesting and evolving position that’s needed more now than ever.

Most meteorologists work behind the scenes, but if you’re professional-looking, have a great personality, and have a voice people like listening to, you may be able to win a position as a television weather presenter. In this role, you’ll get to be a personality on local or national news, and you’ll get a larger pay, closer to $130,000! Deciding to leave a teaching role can be difficult, but it’s made easier when the pay is this good and you have the chance to make serious changes in your field.

A statistician creates and applies mathematical or statistical theories to gain and explain useful information and solve real-world problems.

Statisticians are incredibly useful in multiple industries, like engineering, business, and science. There’s a large gap in the market for people who are willing and good enough to do this job.

If you want to follow in the footsteps of Albert Einstein, who also taught math, you can join in his role as a physicist.

Working as a physicist, you’ll work as a scientist specializing in the field of physics and get to observe and test the natural phenomena that build our world.

This encompasses the interactions of matter and energy at all lengths and scales in the physical universe.

It’s perfect for people who love math, are incredibly rational, and know how to explain their thought processes well enough to educate others on it. This is a fantastic job for passionate math teachers.

Getting a job as the principal of a school means that you’ll work as the leader of an entire community within the school.

You’ll have to manage major administrative tasks and oversee the work of not only the teachers but all employees on the school’s payroll and the students.

Although this isn’t a job with a lot of free time, you’ll be making a difference in children’s lives everyday.

School principals coordinate curriculum, and provide students with a comfortable and productive environment to study in.

This job isn’t for anyone who has trouble finding their voice in adversity, so you must be able to stand up for yourself and communicate your ideas clearly.

The average compensation and benefits manager analyzes wages and salaries and the cost of benefits and helps create programs that fit both the organization and its employees.

As a past teacher, this role can allow you to oversee the fair treatment of every party involved and give you the chance to flex your math muscles in a way you don’t in class.

A sales manager position is perfect for any math teacher coming fresh out of a school. In this position you’ll recruit, hire, and train new members of a company’s sales staff.

This gives you the chance to continue teaching, as well as stretch your abilities while you set sales goals, analyze data and create new training programs for the organization’s sales staff.

The pay is fantastic, and you get to put your teaching skills to use here more than any other job on this list. Getting into marketing is another great option if your interested in business careers. In this role, you’ll have to have an intimate understanding of math since it will help you understand distances and measurements at a moment’s notice.

Working as an air traffic controller can be a highly stressful position since a small error in directions could be massively fatal.

This role is great for teachers because you get to direct and inform people on what to do, but it’s one of the most stressful jobs a person can hold since you have to deal with the reality of life or death situations.

This role isn’t for anyone who fumbles the numbers easily or isn’t confident in their decision-making skills.

Far less stressful than becoming an air traffic controller, an actuary analyzes the financial risks that come with potential future events or decisions.

In this role, you’ll help businesses and clients create policies that shrink the cost of that risk.

This position is vital to the insurance industry and is a great position for any teachers who love math and are great at explaining their decisions and ideas.

In addition, there’s a strong employment lookout in this role since businesses are finding more need for people with this skill every day.

If you’re fantastic at code-cracking and want to have a job that would blow the mind of almost anyone you explained it to, consider becoming a cryptographer.

With this role, you’ll have to be incredibly skilled at math to keep cybercriminals at bay using mathematically based encryption methods.

This is an awesome job for anyone who loves problem-solving, like many teachers do, and is a role that will never get old no matter how long you do it because the problems continue to evolve.

There’s a surprisingly large push for people who have always taught to be teachers, but it’s important to admit to yourself when something isn’t working out.

Consider trying one of these awesome jobs, and you can see if a career change is in the stars, or if the classroom is calling for you.