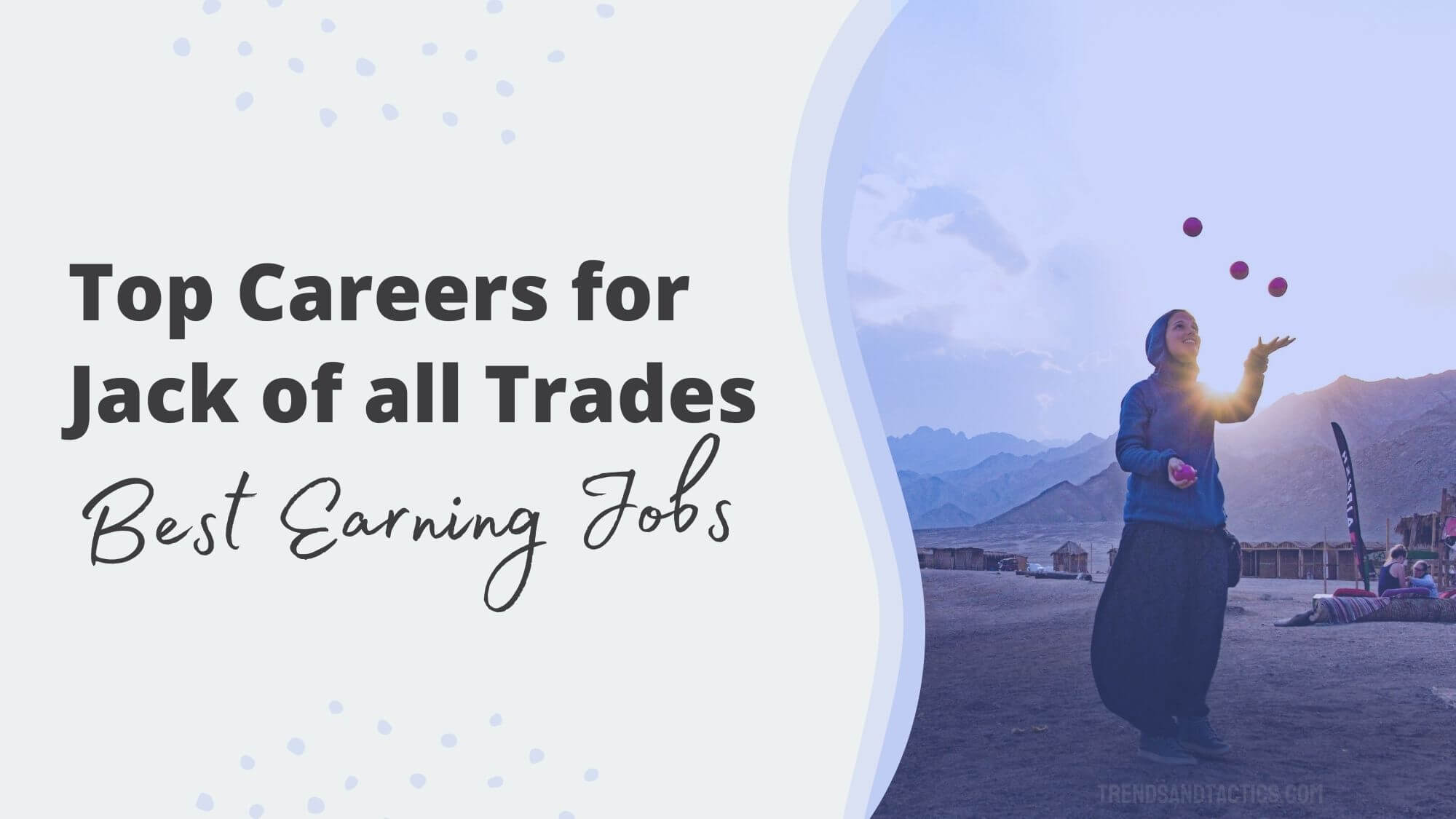 If you’re a jack of all trades, you’re a skilled and creative person who’s flexible and shows an ability to learn on the job.

In a recent study, over 60% of CEOs cite creativity as the most important employee quality. As a result, this type of skill comes into use for most companies, it’s sought after. Thankfully, there are tons of jobs for jack of all trades.

These are the best careers for jack of all trades, allowing both flexibility and a solid income. Don’t be afraid to try more than one to land your perfect job! The average college professor is expected to be knowledgeable about their subject, grab the attention of students with communication skills, be flexible enough to learn on the job, and answer any questions brought to them.

As a jack of all trades, there’s a high chance that you’ve found at least one subject that you’re interested in and have studied in-depth.

Although most colleges will require a degree for you to teach, if you’re outstanding in a field or can show a depth of knowledge in a subject, they may hire you for that role anyway.

Jacks of all trades are creative individuals capable of bringing their ideas to life, for many, that means they’d make fantastic film directors.

As the creative lead of the film, you’ll hold the vision through the entire process of creating it, from pre-production to the final edit.

Most often hired by the executive producer who is ultimately in charge of the project, you can use your skills in many areas to ensure that all acting, set design, scripting, and editing follow the story you want to tell.

Directors wear a lot of hats, so this is the perfect role for someone flexible and interested in how to make money with art skills.

Possibly the best job for someone who’s worked countless jobs and earned plenty of skills, is being an author. Plus, writing can also be a fantastic second job due to the countless freelancing opportunities.

Those working as creative writers can form stories and invent narratives out of their imagination and their lived experiences.

Unfortunately, many writers have to write from what they know, or the story falls flat and doesn’t make any sense the moment someone knowledgeable looks at it.

As a jack of all trades, you can ensure that your characters don’t all fall into the pitfall of being authors themselves (a common problem even Stephen King runs into).

Instructional designers are vital to the education of all students. They’re in charge of redesigning courses, developing courses, and creating training materials.

Anyone from elementary school students can use this material to corporations training new employees.

In this role, you must be knowledgeable about many subjects, capable of learning on the job, and flexible when it comes to editing and correcting problems.

An instructional designer should be good at understanding what the students need to know and the best way to teach that. Illustrators are creatives who bring imagination to life.

Whether that’s a technical illustration and ensuring a company has a good drawing of their prototype or creative picture where you can draw fantastical and interesting scenes, you have to have a vision and creativity.

Some illustrators even leverage their skills to make money selling clip art or starting an online sticker shop.

As a jack of all trades, having a large visual dictionary where you can pull images from your mind and recreate them, or invent worlds and ideas at a moment’s notice, is the largest part of your skillset.

Working as an illustrator gives you the chance to bring it to fruition.

Are you able to conjure up different characters in your mind and give them backstories and interests? Do people tell you that your impressions are fantastic? Being a voice actor allows you to change things up, keep them interesting, and use your life experiences to bring characters to life.

Animation and video games have been getting produced constantly in recent years, meaning there’s a lot of room in this market for someone skilled and flexible to step in.

You have to be good at taking direction, though, so if that’s something you struggle with, it’s time to work on that skill.

Although figuring out how to get a job in marketing can be challenging, social media managers are quickly becoming powerhouses of the advertising world.

These professionals are capable of creating the best interactions for companies while encouraging their audiences and customer base to grow.

In addition, the average jack of all trades has had to deal with a large swath of people and must understand the importance of meeting people at their level, which makes them an awesome choice for this role.

Although this can be draining, since you’re talking to thousands of people every day through social media, it’s an awesome job that ensures every day is different and unpredictable. This will require some previous education or training, but depending on the type of jobs you’ve carried in the past, it can be a great fit for a jack of all trades.

The average app developer has to create or write programs for specific operating systems.

They have to be capable of problem-solving, understanding programming languages, and working quickly and thoroughly.

This role needs the creativity that comes from a jack of all trades since you’ll often create apps from scratch and make unique experiences for users.

Anthropologists work with archeologists to evacuate and study artifacts. So not only will you have to consider the origin, development, and behavior of past humans and their civilizations but also how that reflects against the modern world.

This works with jacks of all trades because they have to consider the cultures, languages, and physical characteristics of people in various parts of the world, which requires the general knowledge of a large swath of disciplines.

It can be incredibly detailed work, so it’s vital that anyone in this field should be able to handle change, understand the importance of studying human life, and be willing to learn on the job.

If you’re a quick learner, fast on your feet, and great with people, bartending could be the role for you.

Most jacks of all trades understand how to keep a conversation going and can learn on the job. Working as a bartender, you’ll be expected to recall many drinks, interact with customers, handle money, and keep the customers entertained to a degree.

These are all skills that most jacks of all trades excel in.

Working as a career coach is a fantastic opportunity to put your skills to work. As a jack of all trades, the chances are that you’ve worked in plenty of fields before and have knowledge and understanding of many roles.

This means that you’d make a fantastic career coach because you know what it takes to get into these jobs and excel at them.

Although there are plenty of jobs you’ll need to study about before you help someone, thankfully, as a jack of all trades, you pick up knowledge quickly and are capable of learning as you go.

If you want a job as flexible as you are, being an art director will be life-changing. Art directors decide which pictures, art, or other visual elements to include in whatever project they’re working on.

This job covers a large swath of media from television and movies to magazines and newspapers.

As an art director, you’re creating a unique look and feel for your project, so you have to have a keen eye for detail, understand the importance of color and shape use, and know what the general person will see when they look at your project.

When it comes down to it, it’s a fast-paced job that requires an extraordinary amount of flexibility and creativity.

Therapists are incredibly good listeners, who have to have a comprehensive understanding of the human condition, and what drives us to feel, do, or say the things we do.

This job may feel a little off the wall, but as a jack of all trades, you have to be flexible and willing to learn, making this the perfect job.

Thinking on your feet while thinking critically at the same time will give you the best chance at succeeding as a therapist. This is an incredibly rewarding type of job that helps people from all walks of life.

Working as a journalist is a very detail-oriented role that requires people to be able to recognize when a story matters, go after it and tell it in a way that others will be able to understand.

As a journalist, you may be put in positions where you have to job shadow, write about people that might be misunderstood, or explain points of view different from your own.

These are all skills that the average jack of all trades is already very practiced in.

User experience designers focus on all aspects of a product’s development. This means an intricate understanding of the product’s design, usability, branding, function, and marketing.

This fully encompasses the creation of an item and ensures it’s something that the customer or user will be able to work with.

It’s fantastic for a jack of all trades because it requires general knowledge of many parts of creating a product or service.

If you’re capable of seeing all sides of a story and can always spin things to have a positive outlook, this is the perfect job for you.

Public relations specialists create and maintain a good public image for whomever they represent. This could mean individuals, groups, organizations, or businesses.

They have to be able to craft media releases and shape the public perception of their client to ensure their client is successful.

This requires an incredible amount of problem-solving and creativity that’s only found in jacks of all trades.

If you want a job that requires you to wear many hats, being a program director is perfect for you.

This position is responsible for researching, planning, developing, and implementing the programs they’re working on. In addition, they have to hire, train, mentor, and set goals for programs based on their organization’s needs.

It can be a lot to take on and requires you to function in all HR roles and act as a supervisor initially. If you’re a jack of all trades and want a job that allows you to cover many positions, this is the one for you.

Whether you’re just starting your career path, or you have a lifetime of odd jobs and interesting skills built up, being a jack of all trades ensures that you’re a creative person who can learn on the job.

If you try any of these lines of work, you’re guaranteed to flourish!