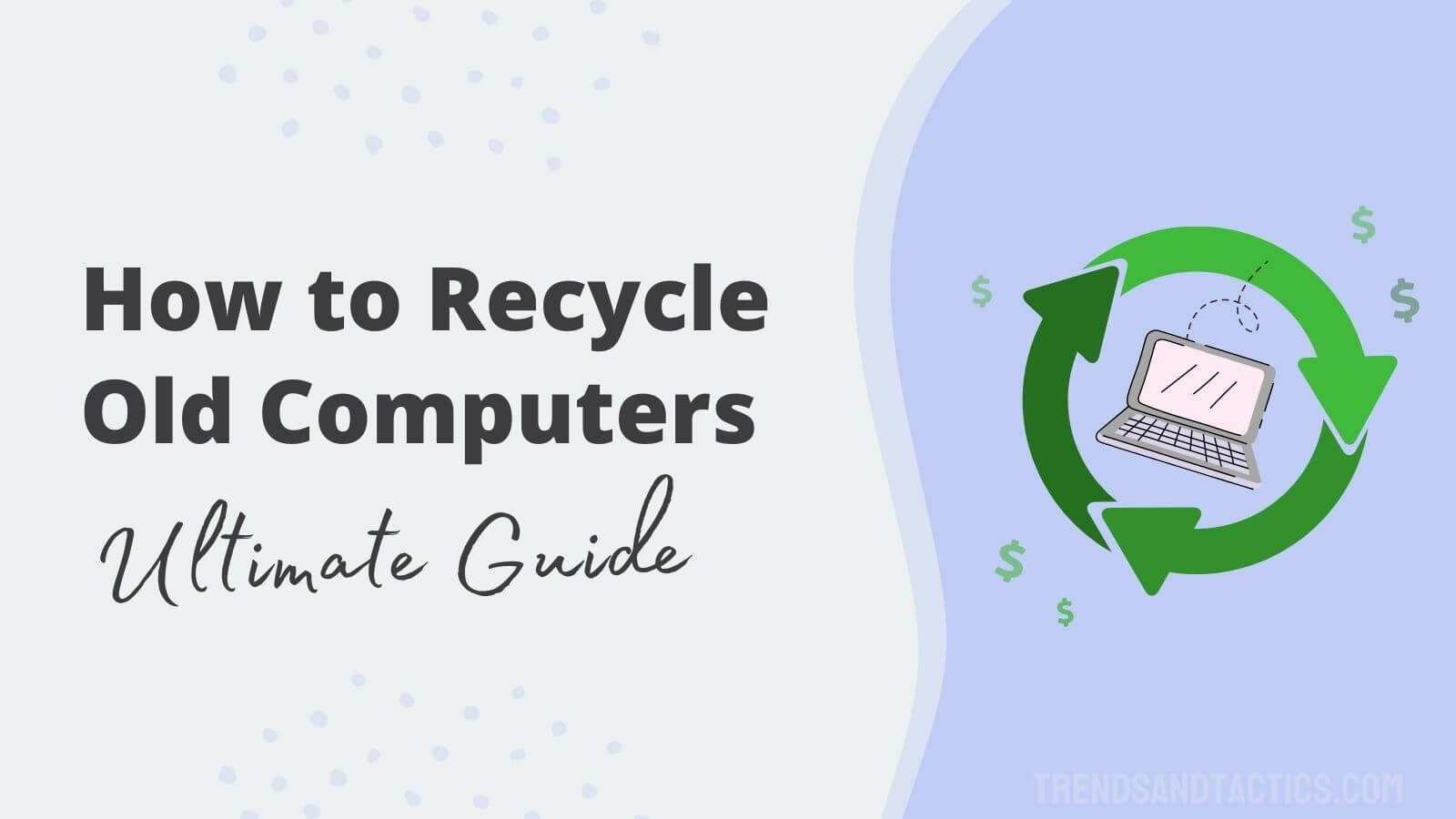 With new technology coming out every month and our favorite brands constantly updating their products’ abilities: it’s no wonder people go through computers so quickly.

In 2020, computer sales rocketed 10% higher than they were in previous years, with many seeing this as a sign to recycle old computers for cash.

Now’s the time to sell computers and parts if you have them, but many aren’t sure how.

What to do if a computer is unusable?

Sometimes older computers aren’t worth trying to repair or save.

Either it’s ancient, or to fix it would cost far more than it’s worth to you. If that’s the case, here are the top ways to give this computer another chance.

Just because it’s broken doesn’t mean you can’t sell it! Early 2021 saw a drought of computer parts available, and this shortage stretched well into the year.

Items like graphics cards were nearly impossible to find, with cheap brands selling out immediately and then getting marked up by hundreds of dollars on reselling websites.

Whether you are selling your old computer whole or as parts, following the right steps will almost always turn around a quick profit.

Getting cash for old computers is also a popular way for teenagers to make money online, without committing to traditional work schedules.

If you don’t need your payment in cash, you can trade in your computer whole or in parts to a dealer who’s willing to give you store credit in return.

The top places to do this are:

All of these companies allow you to sell your computer or parts to them in exchange for credit for future purchases from them. Most computer brands prefer if you’re selling them a computer they manufactured, but some aren’t so picky.

If you’re not in it to recycle computer parts for cash and don’t want to trash a piece that you feel still has some life to it, a donation might be your best option.

Most donation centers take computers that work or don’t, and many can be written off for tax purposes.

Although it doesn’t necessarily have to work, it is nice to take the extra time to clear and clean items before donating them to save them some time.

Never throw computer parts directly into the trash. Instead, recycling is the way to go.

In fact, most states require residents to recycle certain types of electronics.

Many aren’t sure what this means, but it’s not that complicated. You can drop off your old parts at a BestBuy, which recycles electronics, or Staples, which set the trend in 2007.

Most cities offer some locations to recycle electronics, Earth911 offers a country-wide map on their site to help recyclers find their nearest locations.

Selling Individual Parts from Your Computer Selling old computers for cash in one solid part can be unwieldy and a pain. If you don’t know which features work or which don’t, it’s harder to sell than to sell it as one unit.

Here are some tips to help anyone recycle computer parts for cash rather than sell them as a whole.

Which parts are worth the most?

Because of the current climate around parts, some are worth more than they usually would be. Motherboards and graphics cards are nearly doubling in value, while most other components stay close to the same of their expected value.

The following parts are the most expensive outside of those, and where that price comes from.

How to remove computer parts?

It may seem simple to get into your computer and remove what you need, but you could damage expensive pieces if you don’t know what you’re doing.

These are everything you need to be able to dig deep into the device.

Take it slow, ensure that you know what you’re doing, and be patient with yourself if you make mistakes. You won’t be able to recycle old computers for cash if you break them when you’re removing them.

Is it worth it?

Although the power supply or the RAM may not be worth getting to so that you can sell them: the graphics card and CPU are often more than worth it. It’s essential to check first that everything works or turns on so that you can avoid wasting your time.

If the computer is working very well and functioning as it should, it’s often not worth piecing things apart. Of course, the items may be worth more separately.

Still, it’s also important to remember that it’s more work for you and more waiting to find a customer that’s willing to pay for these items.

Often it’s more worthwhile to sell a computer as one piece, rather than spend hours in a partnering time with everyone interested. It’s not only one of the more popular side gigs for software engineers, but practically anyone can do this.

Tips to Make the Most when Recycling Computers Instead of throwing that money away, here are the top things to consider when you’re trying to recycle computer parts for cash.

When you’re listing items for sale, you’d be surprised how much aesthetics matter even when purchasing something they’ll never look at.

Use pressurized air, static cloths, and other computer supplies to clean off every item and make it look presentable.

You don’t have to take glam shots, but you should attempt to make things look attractive and new when you’re going to recycle old computers for cash.

2. Ensure You Have The Year and Make Correct

If the reviews are reasonable, you can even link to other sites where people have good experiences with them.

As previously stated, selling all items separately may be a slower process, but it does help to ensure you sell as many things for as much money as possible.

When items sell, ship them out as soon as possible, and try to interact well with your customers and do as well as you can because their reviews may help others find what you’re selling.

A bad review for someone who’s selling things out of their home can quickly kill their new recycling business.

Where To Sell Your Computer, Rather than Recycle

Regardless of whether you’re selling a whole computer or just the parts you were able to salvage: where you sell matters.

A classic in the corner of selling items online, eBay is known worldwide as the place to go when you want to buy for cheap and sell things you don’t know.

Making money on eBay is at peak popularity these days, with computer parts being a popular niche people target.

Thankfully, because of this, that means everyone selling computer parts and/or computers has a diverse audience available. Unfortunately, this also means that there’s a ton of competition and racing to the bottom in prices to win customers. Don’t engage in this game; try to sell for a fair price.

No fees, no shipping, no problem! Selling on Craigslist is the place to go for anyone trying to sell something quickly, who’s also comfortable with being bargained with.

Unfortunately, craigslist limits you, leaving you unable to be accessible to all customers.

This could make you want to lower your prices, which may be a big blow. Another issue is that you have to go out to sell these in person, which is something none of these other sites make you do.

Selling at flea markets is a popular alternative, if you prefer to sell in a more public place.

This smaller electronics selling site has been making a name for itself in recent years. Swappa is a trading and bidding site that works to cut down on fees and in-between areas.

As a seller, you can rest easy knowing that the buyer has to pay the costs, but unfortunately, this can force you to lower your price to try and compensate.

Although it’s an excellent interface, the purchases seem to go through quicker than they do on eBay.

ItsWorthMore is different from other sites on this list because you’re selling your goods to a company instead of a person.

This site offers to purchase your electronics from you, without any guesswork of whether or not you’ll find a customer for a set price.

Unfortunately, you’ll lose a little bit of income to the lack of competition through this site, but for those who want to sell quickly, ItsWorthMore may be worth a look.

What to do before getting rid of your computer?

Before you list your computer for sale, there are some steps you have to take. These ideas will not only make it easier to recycle old computers for cash, but they’ll also protect you and your information from the next person who owns it.

Create A Full Backup of Your Information

If you have any files on your computer that would be hard to replace or that you don’t want even to have to consider losing: it’s a great idea to have a backup in place.

You can either do this by backing up your computer onto a thumb drive or hard drive you can access later or backing up everything that matters onto the cloud. This will allow setting up your next computer to be as accessible as possible.

More people than ever have access to the internet, which means that if your private information gets stolen, it could become available to a massive market.

The personal information an average computer holds is:

Any of this information can be used to steal your identity or empty your bank accounts. Before you sell your computer, ensure that you wipe the memory back to factory settings.

This will get all of your info off of the device and let you rest easy when your computer is purchased by someone else.

Clean It Up Well For Photos

When attempting to recycle computer parts for cash, you don’t have to make things glimmer, but a good picture can help items sell faster.

Use screen cleaner, pressurized air, and wipes that can help you get your parts spic and span for going onto the market!

Computer parts are a hot market right now, and more and more people are desperate to get their hands on these parts to build an excellent setup for work or play.

Instead of tossing it because it doesn’t work as a complete unit, it’s good to consider selling or donating it as parts instead!

At least this way, you can have a little money to go towards your next computer.