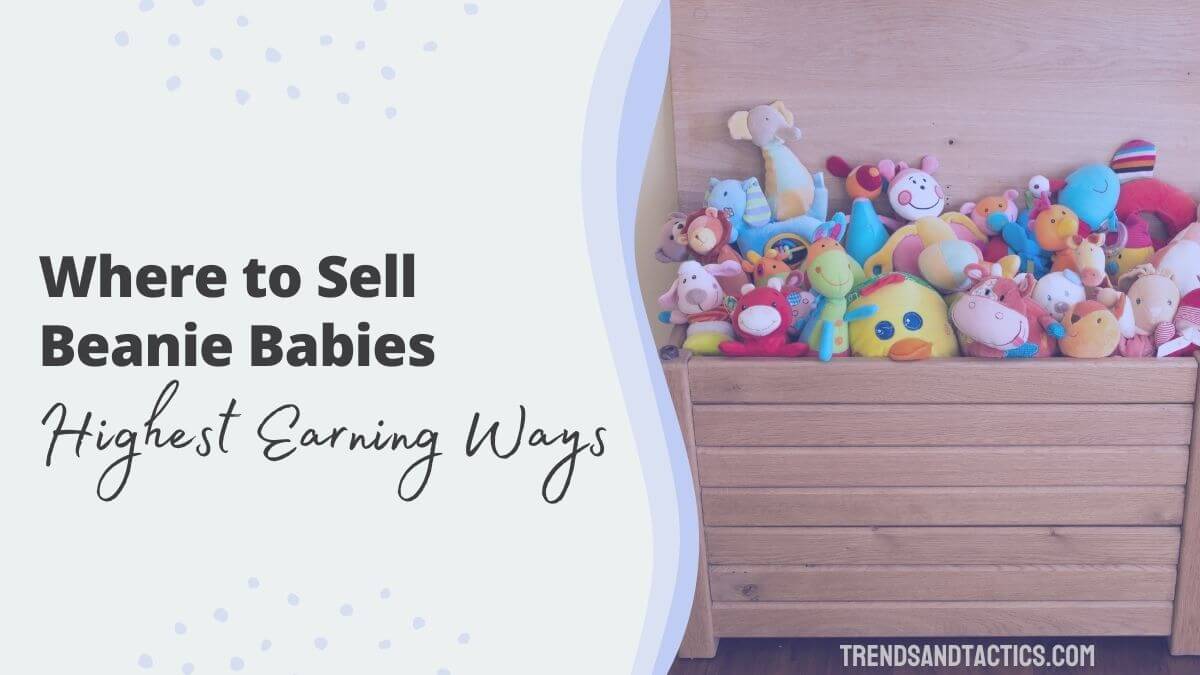 Beanie Babies are one of the most popular collectible toys in history. In the 1990s, when they began to gain collectible status, people went wild for them.

They were so well known that nobody had to ask where to sell Beanie Babies, because almost everyone was buying.

Selling these collectibles is a little more difficult these days, but some people are still flipping them for small fortunes.

This is everything you need to know about where to sell them today!

What are Beanie Babies worth in 2022?

Beanie Babies have gone in and out of value over the decades.

Although many started simply collecting with their children as a way to connect, collecting Beanie Babies eventually became a hobby that some took extremely seriously.

Although the company was started in 1989, it didn’t begin to gain steam until the late 90s, when collectors realized they could make serious money selling to others.

As more toys were released and buyers got more ravenous, that bubble grew to epic proportions until it popped in mid-2000.

Beanie Babies once worth thousands were suddenly selling for less than their purchase price, making them hard to even sell to pawn shops.

For many this meant selling Beanie Babies was no longer a viable investment, unfortunately.

Beanie Babies were most popular in the late 1990s, as people collected as many as possible. Since the documentary on Beanie Babies called Beanie Mania came out in late 2021, there’s been another surge in interest and value.

In 2021 the documentary Beanie Mania took a deep dive into the history and popularity of these toys, and explained the rise and fall of their value.

Unsurprisingly sparked another bump in interest.

Collectors have noted that prices are rising again, as new investors are deciding to be interested in what these toys can be worth.

Where to Sell Beanie Babies for Top Dollar Selling Beanie Babies is all about timing and interest. Certain collectibles pick up throughout the year in popularity, and riding this wave will help you sell your toys for max price.

For example, don’t try to sell Batty the Bat in Spring or Winter. Instead, make this listing in mid to late summer, right when people start getting excited about Halloween.

Although they can still sell for substantial amounts off-season, waiting can ensure you get the highest payout possible.

If you’re selling to a reseller like Sell2BBNovelties or PlushCollector, keep in mind that their offers will be on the low end since they still need to make a profit when reselling it themselves.

Only sell to these sites if you want to get your collection sold off quickly with minimal hassle.

What Beanie Babies are worth the most? When you’re buying Beanie Babies, it’s a good idea to get to know the signs of a fake, and what toys are most popular.

The clearest mark of value for many are defects or misprints, which set the toys apart.

Some of the most expensive Beanie Babies are valuable, because of a tag misprint or maybe an incorrect stitch was used in a particular batch.

Although the Ty company may have viewed these as mistakes and corrected them later, collectors see the value in how rare it makes these defect Beanie Babies.

Many of these are only worth so much if they’re from a specific year, since some are printed for multiple years.

If a seller is having trouble selling an item and proving authenticity, you’ll also struggle when it’s time for you to sell it.

Do Beanie Babies Have to Be Mint Quality

Mint condition is a term that comes from collectible coins, meaning they’re still in their original minted quality.

It tells buyers that the item is in fantastic shape, and hasn’t been tarnished in any way.

When it comes to Beanie Babies, mint condition generally means that the toy is virtually perfect, and the hang tags and tush tags are pristine.

These tags may turn yellow over time, but that’s not seen as a negative since they can correctly show their age.

Near-mint quality is if the beanie baby itself is perfect, but the tags show wear and tear and have slight issues.

Excellent quality is if the plush itself is in flawless condition, but the tag is worn or creased.

There’s a noticeable pattern here – regardless of tag quality, for the toy to be worth anything, the plush has to be in perfect condition.

The most important thing you can do when selling these collectibles is to be honest about quality. If you mislead on the quality it’ll only result in a return request.

Will waiting make them worth more money?

The waiting game is popular with many forms of investments.

The general idea is that the longer you have something, the less common it becomes thus its value goes up. This rule doesn’t always hold true, but when it does, toy values can skyrocket.

In other cases, waiting doesn’t drive the toy’s price up at all.

Sometimes waiting is the only way to see if they’ll be worth anything.

When waiting to sell your Beanie Babies, make sure to store them in an air-tight and moisture-proof container.

What mistakes should everyone avoid? Some mistakes are inevitable, but you can always bounce back if you’re careful, and learn from errors.

One of the biggest mistakes you can make is investing tons of money toys marked rare, with no documentation to support that claim.

Although many toys come with ‘certificates of authenticity’ on sites like eBay or Etsy, if someone is willing to sell you a fake toy, they’re probably willing to print a fake certificate too.

So make smart investments, and when in doubt turn to an authenticator.

If someone is selling an authentic $30,000 Beanie Baby, they’ll never have an issue getting it certified by an appraiser to show it’s the real thing.

On the other hand, someone trying to get away with selling fakes will get offended by this request.

Protect yourself and your investment, so you can minimize making high-dollar mistakes.

Ty Beanie Babies are one of the most easily recognized toys globally. Be smart about where and how you sell them, and you’ll maximize your Beanie Babies payout.