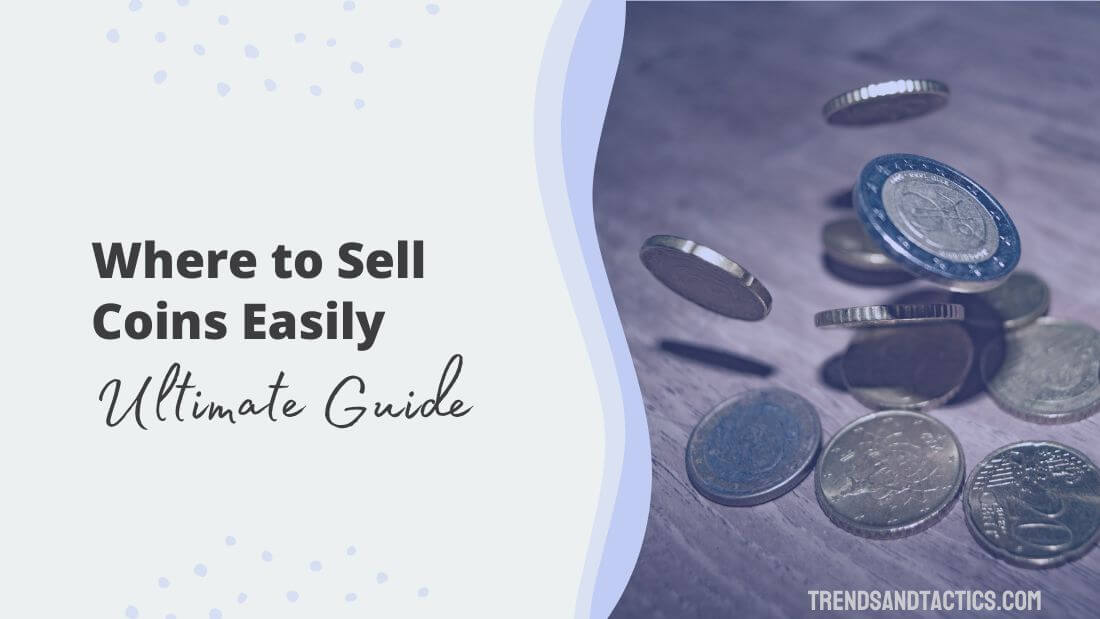 If you’ve got old coins sitting around collecting dust, you just might have a good way to make some extra pocket change.

Many times, old coins will be worth more than the actual coin itself, especially if you own a rare coin.

If you’re wondering where to sell coins, read our guide below to find out how to sell coins for extra money today.

How do I find out what my coins are worth? The first step in selling coins is finding out whether the old coins you own are actually worth any money.

There are a number of different ways you can find this information out, and luckily, the internet is a great source for research.

When you’re searching online, you want to know exactly what coin you have.

This can be found by knowing the domination, looking at the mint number and understanding whether it was a special-issue coin.

Once you have this information in hand, you can research whether there is a demand for the coin.

When you’re studying your old coins, one thing you should look for is mistakes on the coin that were made during the minting process. This could include coins issued in error, doubled die coins and more. If you have one of these, it would be considered rare, which could increase its value.

Like other types of collectibles, how much a coin is worth depends on how much someone is willing to pay for it.

This means there won’t be a strict “book value” of a particular coin, aside from its weight in the actual metal it contains.

Once you have a ballpark estimate of its worth, you can list it on the top places to sell stuff.

Knowing the Quality of the Coin

When you go to sell coins, you also want to know what the grade, or quality, of the coin is. The higher the quality, the higher the value, of course.

Included in the grade are characteristics such as:

In recent years, investors have been looking for alternative assets. One asset that’s risen in popularity is old coins, especially among wealthy investors. So, if you have old coins that are valuable, now is a great time to take advantage of the interest in them.

Where can I sell coins for money?

There are a number of different ways that you can sell coins for money. A good first place to start is visiting a local coin shop.

These businesses have a lot of experience dealing with old coins, and they likely know what they’re dealing with from the moment they first see it.

If nothing else, the people who are at the coin shop can give you their opinion of what they think of the coin, or even just simply more details about the coin itself and its background. You can also see how much pawn shops pay, since some pay surprisingly well. Other options for selling your coins are at physical auctions. If you have a coin that is rare enough, you could find an auction house that would be interested in selling it.

The auction house may have a strict requirement on what they will and will not sell when it comes to coins, though, opting for only the very valuable ones or for bigger collections of old coins.

Of course, one of the most popular ways to sell old coins is through online marketplaces.

Some of these sites are set up specifically to sell old coins, while others are more generic online marketplaces where people buy and sell a variety of different goods.

You may even consider if selling on Amazon is worth it, if you plan to sell a lot more.

Some of these top sites include:

How to Sell Coins on eBay eBay is obviously one of the best places you can sell old coins online.

With more than 180 million people using the site across the world, there’s no mistaking why that is, either.

While eBay has a lot of visitors to their site, they aren’t all there just for buying coins.

There are so many different items for sale on eBay that it can sometimes be challenging to sell old coins, if only because they can get lost in the all the noise going on there.

Despite this, eBay provides a great opportunity to sell old coins for good money because of this huge audience. You’re unlikely to get as many people as you can get on eBay on any other site.

If you’re going to try to sell old coins on eBay, you need to figure out a way to have the right people find your listings. It’s very important that you categorize your coins properly, take the right pictures and give really good descriptions. A great headline for your product will help it stand out from other old coins listed on the site.

In addition, because they’re set up as an auction site, you could end up making a lot more money than you expected if your coin is very popular and multiple people are bidding on it.

In addition, if you’re selling other old things, it could make it easier to streamline the process of selling old coins if you do it all on eBay.

If you are interested in expanding beyond coins, you can take a look at these top items to resell for a profit or even learn about reselling Supreme brand clothing to increase your profits further.

eBay is a very popular place to sell old coins, and the numbers don’t like. Over an average 90-day period, there are 2,200 sales of Morgan dollars with a value of at least $1,000. That’s a large number of sales, and a great confidence builder if you’re looking to sell coins on eBay.

Where to Sell Rare Coins

If you have a really rare coin or collection of coins, you’ll want to be a little more selective about where you sell them.

eBay would still be a good place to list your coins for sale, but just know that you may not find as many buyers as you might need there.

If you’re looking to sell your rare coins for a good value and in a decent time period, you may need to go directly to a coin dealer or a coin company that deals with rare coins.

Not only will these places know what they’re dealing with and the value of what you have, but they’ll have the money to be able to afford purchasing them.

Rare coins are also usually a great idea to sell with auction companies.

If your coin collection or individual coins are truly rare, they could be extremely valuable to the auction companies, which will take a percentage of the final amount of your sale.

Benefits of Selling at an Auction House

One of the biggest advantages of selling rare coins with an auction house is that they will have a large audience of people who are looking for the type of rare coins that you are selling.

This would give you that perfect combination of what the benefits of an auction site like eBay and a coin dealer would provide — a large and knowledgeable audience that knows what you have and wants it.

If you’re planning to sell your rare coins with an auction house, it would behoove you to get an independent audit and valuation of your coins.

If your coins can be certified to be authentic and of a certain quality, the auction house can use that as a selling point.

While the auction house will likely conduct similar audits and valuations on their own, it’s a good idea for you to have this done independently just so you can verify this information.

When you’re dealing with rare coins, you want to be as prepared as you can, since they can be worth a lot of money.

There are many different places where you can sell coins in 2022, and the above are just a few of the places you should start with.

If you have old coins that you want to sell, know that you should start by researching what you have, what condition they’re in and how much they might be worth.