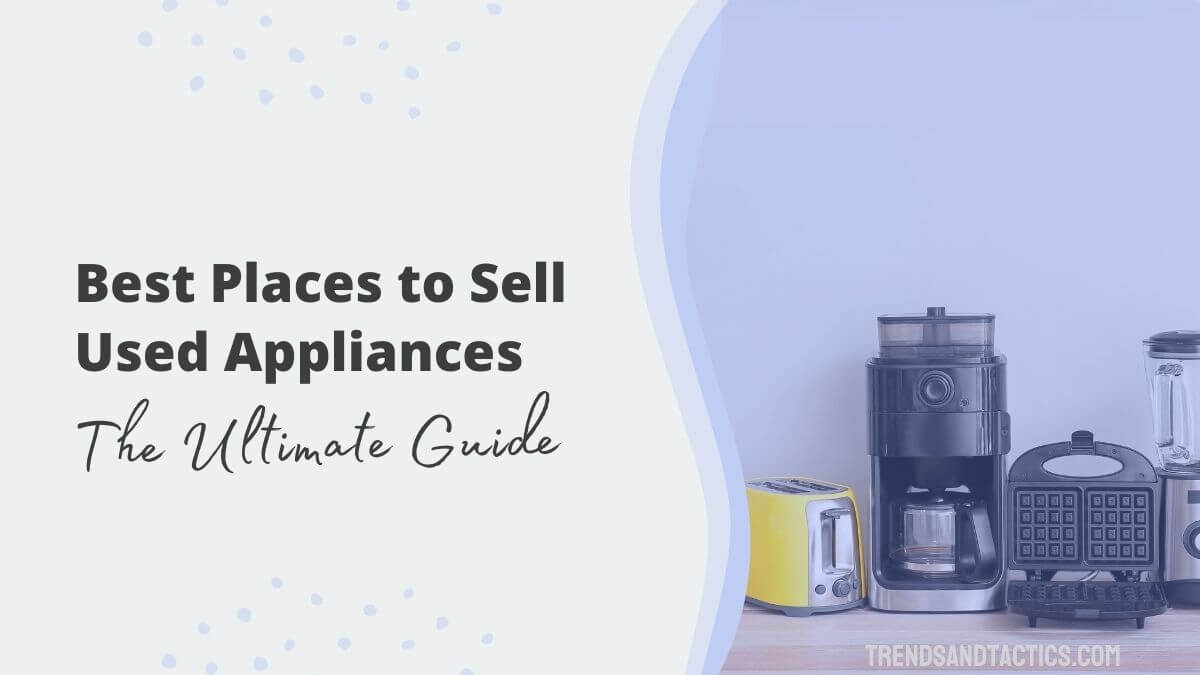 Older appliances are something almost every homeowner comes into possession of, and when it’s time to get rid of them, many aren’t sure how to start selling old appliances.

From used fridges that we don’t need to a toaster from the 1950s that doesn’t suit our modern tastes, it’s hard to be sure where to sell used appliances when you’re ready to give them a new home.

These are the top places to sell them, and how to make sure you get their value’s worth!

Are old appliances worth anything?

Older appliances are in almost every home, but it’s hard to tell if it’s worth recycling appliances or selling them.

Whether you are recycling eyeglasses or recycling old computers, recycling can be a great way to earn extra cash.

Some of the most popular appliances people have are below, plus their estimated values. If you decide not to clean it up to resell it, a fridge can be worthwhile to sell as scrap because it might have copper components.

Otherwise, make sure you deep clean it and get out any odors before attempting to sell.

Another appliance that requires plumbing might be worth scrapping a washer if you can’t sell it.

If you want to make sure someone will buy it, get out any trace of odor and deep clean it. Even old washing machines are valuable if they’re clean and work.

On average, scrapping a window air conditioning unit may only get you four to six dollars, which isn’t worth it.

Usually, selling older microwaves isn’t worth it because there are plenty of brand new ones that can be purchased for less than $50 from stores like Walmart.

Scrapping one should get you between five to eight dollars.

These are incredibly popular: sell it and don’t scrap it if you have one that functions. Even a subpar one can gain you $25 to $50 on a local market.

Unfortunately, the market can be hard to predict. Generally, if it’s working and there’s no odor coming off of it, selling it as a used item is generally the best idea.

Over 30% of consumers said they didn’t care if an item was new or old as long as they got a great deal on it. Unfortunately, dishwashers are the least-used appliance in American households, so it shouldn’t be an option you consider flipping.

Where to sell used appliances?

The most important part of selling used appliances is deciding where to list them. Fortunately there are many easy to use websites to sell stuff.

You can find the best ways to sell appliances below (7 options).

eBay is often the most popular choice, although people worry about shipping items. Thankfully, eBay Classifieds gives you the chance to sell to local people for pickup or drop-off only.

This connects you directly to buyers in your area instead of figuring out shipping an item a thousand miles away.

eBay is a fantastic place to recycle a ballast for cash as well.

Unfortunately, this isn’t used as often for appliances as other items on this list, so it can take longer to sell.

Facebook Marketplace has become a powerhouse for selling appliances within the last few years.

One of its largest draws is that you get to see people’s profiles and know if they’re trustworthy; unfortunately, for sellers, everyone can see it if someone comments on a listing.

This can make haggling difficult if someone sees how low you went on the price for someone else.

This website is entirely dedicated to buying and selling things locally, which allows you to sell whatever you have for pickup or drop-off.

Although this site does have its fair share of hagglers, it’s the best one for getting paid what you’re requesting when you list items.

Garage sales are the least popular option on this list because it’s often seen as a by-chance sale.

You have to advertise your garage sale thoroughly and try to get as many signs up as possible to direct people to the sale, which unfortunately might not work out.

Similar to selling at flea markets, making sure merchandise is presented well can be the difference of making the sale or not.

This also depends on the weather and where you live, which isn’t a great idea. This is only an option if you have one appliance but tons of other things to sell with it.

Like how OfferUp works, this site only allows people within five miles of you to bid on or purchase your items.

This ensures that if you have to deliver an appliance, you don’t have to go far, and you’ll be more likely to find people who aren’t going to back out because they have to drive half an hour to get to you.

Unfortunately, it does limit who can see your posts and isn’t the best choice for everyone.

Selling on Craigslist is possibly the most popular option on this list. This is for multiple reasons, ranging from the fact that it’s so widely used, to the ability to change, relist, and update your posts at any time.

On top of this, you can also find other cheap items for sale that you can purchase and relist when you want to.

This 25-year-old site gets 10 million unique visitors every day: more than any other marketplace on this list. Home appliances are the top-ranked item to sell on this site because it is easy to find local customers.

Thrift markets are hit or miss, with the largest issue being that you will have to transfer your items to and from this market every weekend when you’re ready to sell until you purchase a more permanent booth.

These markets can be great because many people seek them out for deals or find items they don’t know where else to buy: but many aren’t prepared to get them delivered to their home.

You can charge extra for this service.

Although the market to sell used appliances can be difficult, especially if you’re in a less populated area: some rules stand true.

These three tips can help change everything and ensure you sell your items quickly.

Wait to Sell Until Semester Breaks

This is especially important in a college town: but make sure to wait to sell your appliances until a semester break if you can.

College kids, and those moving into their first apartments, are some of the most reliable customers for used machines.

This is often the beginning of summer and during the winter holidays. Be aware that they’ll try to haggle, but you shouldn’t go too low on your price.

The most important thing for any appliance, besides that it functions well, is that it’s clean and looks appealing.

Nobody wants to think about putting their food in a fridge with gross stains and weird oily shelves.

Take the time to deep-clean whatever you’re selling, and ensure it’s well lit when listing it.

Don’t Race to the Bottom Price

When selling on a marketplace where there are multiple other sellers, it can be tempting to try and drop your price a couple of dollars below someone else’s price to try and grab the sale first: but don’t do this.

All this will do is ensure that you get paid less than your item is worse. Instead, list your item at the value it’s worth, describe the item well, and ensure you don’t get underpaid.

Can you flip used appliances for profit?

Flipping has hit popularity mostly with older furniture and homes: but it’s possible for appliances. In fact, it’s becoming one of the most profitable resell items, because you can get them for free if you haul them away.

To do this correctly, you have to buy low, be willing to clean and scrub or know how to repair items, and possibly be ready to paint or refinish the items.

The most popular way to do this is by buying appliances on Craigslist. Some have succeeded, making around $10,000 by fixing things up and knowing how to negotiate goods.

The reason many succeed at this is that few know the true value of a used appliance and will price something at a has-to-go value, which allows them to buy them cheaply.

Many items like washing machines are also so inexpensive because they’re assumed to be ‘broken’ when the fix is cheap and easy like a lid switch replacement or buying a heating element or thermal fuse.

Keep an eye out for free or extraordinarily cheap deals, and scoop them up as quickly as possible to sell.

The main things you’ll need are a truck that’s capable of moving things around, a hand truck or dolly, possibly a ramp, tie-down straps, a good tool kit, and some white appliance paint so that you can cover up scratches or rust.

Although it can be tricky to try and sell older appliances, it’s not impossible!

Clean it up, so it looks new, avoid repainting or refinishing it, and list it at one of these locations, and you’ll sell your old appliance in no time.