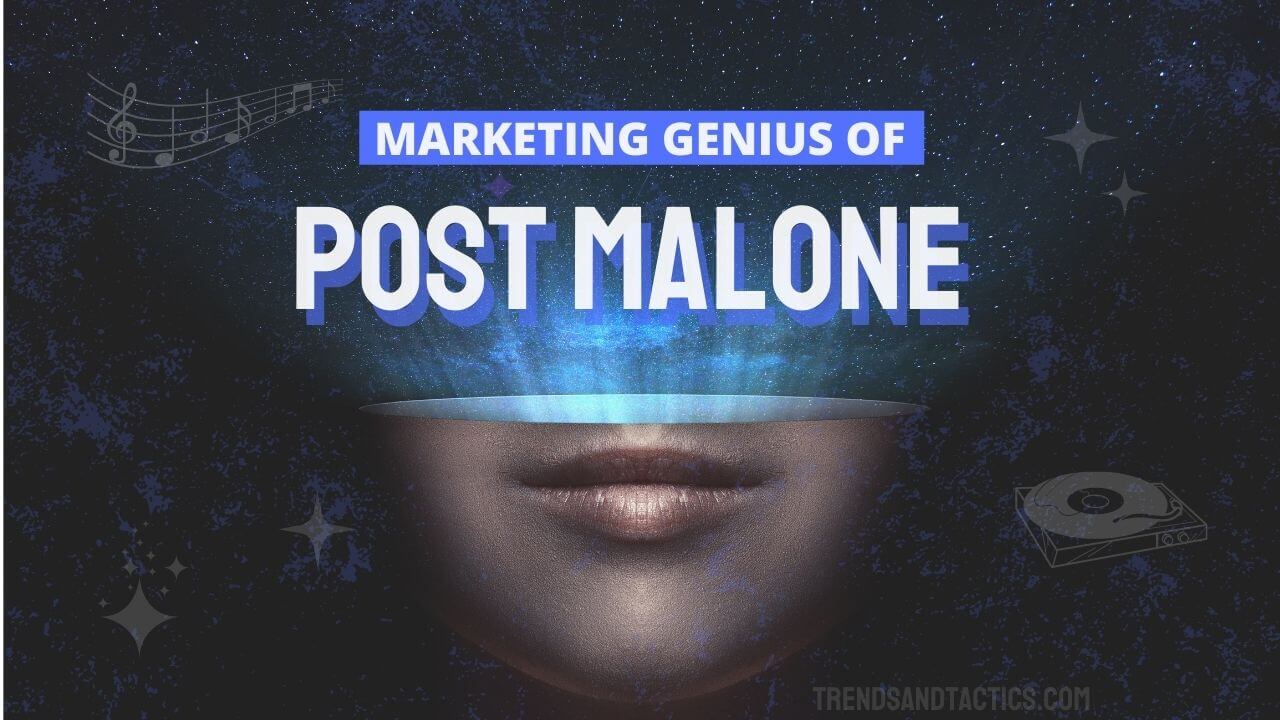 It wasn’t long ago people didn’t know who Austin Richard Post was.

But at 26 years old, Austin Post (aka Post Malone) is now one of the biggest names in the music industry. The story of how Post Malone became famous is an interesting one, full of powerful marketing lessons for entrepreneurs.

Post Malone was born in upstate New York, in a city called Syracuse. He was raised by his stepmother and his father, who was a DJ.

It was through his father Rich that Post Malone was introduced to a variety of musical genres such as country, rock and hip hop — all of which he draws inspiration from for his music today.

He moved with his family to Texas when he was only 9 years old. The move was made because his father was hired as the concessions manager for the NFL’s Dallas Cowboys.

In 2009, when he was only 14 years old, Post Malone developed a more intense love for music, and a desire to learn to play and produce music, through video games. As he explained in a 2015 interview with The Fader:

“Six years ago, I started playing guitar because of Guitar Hero. I am five star everything on expert mode in Guitar Hero 3. My parents don’t make music. I was around music, but my parents were never musical.

“I just wanted to rock out. I taught myself how to play real guitar off YouTube videos, watching people play stuff, like a lot of AC/DC and Metallica.”

So, while Post Malone was certainly introduced to music when he was young, it’s not as if his parents were musical prodigies in any way.

Instead, he discovered a love of music, which was his motivation to do what he does today.

It wasn’t until two years later, though, at the age of 16, that Post Malone began making his own music under his stage name.

Despite many people thinking his name was a tribute to Utah Jazz star Karl Malone of the NBA, he said it was a combination of his own last name (Post) and a rap name generator program that spit out the “Malone” part.

The story of how Post Malone blew up actually started around this time of his life, even though it was at such a young age.

He used his motivation and was very self-driven to find success in non-traditional ways.

That is the basis for how Post Malone became famous.

He Made Connections in the Industry While Post Malone recorded his first mixtape that he called “Young and After Them Riches” when he was 16 years old, it wasn’t the impetus to how Post Malone blew up.

In fact, that mixtape was really just shared with some of his classmates at Grapevine High School in Texas.

Dropping out of school

It wasn’t until Post Malone dropped out of college in Texas and moved to Los Angeles to live on his own at the age of 18 that he would discover his first big break in the industry.

And a lot of that success had to do with the fact that he made valuable connections with people in the music industry.

You’ll notice in Post Malone’s story, he is consistently networking with people in his environment, which is a well known high income skill.

When he moved to California, he connected with one of his long-time friends, Jason Probst, who is a professional game streamer.

Those two met other musical artists and producers and formed a music group called BLCKVRD.

While that hardcore metal band didn’t make it very far, it did lead to his first true success.

Members of that group all moved into a house together in the San Fernando Valley, and it was there that Post Malone met Sauce Lord Rich and FKi 1st, who together formed a music production company called FKi.

That song was released back in February of 2015 through a SoundCloud account that Post Malone had, and he filmed an accompanying music video in July of that year.

In just the first month after the video was released, it received more than 1 million views on YouTube.

That alone got Post Malone recognized by serious music executives, and one month after its release, in August 2015, he signed a record deal with Republic Records.

Simply having a record deal doesn’t tell the story of how Post Malone became famous, though.

He Collaborated with Other Well-Known People

Post Malone burst onto the scene with his debut single, “White Iverson.” It reached as high as #14 on the Billboard Hot 100 for songs in the United States.

While it gave the artist a lot of attention in mainstream music circles, the single wasn’t the only way Post Malone grew his career.

He made a name for himself with that single, for sure, but there are many artists who do that and then become known as one-hit wonders.

In other words, artists have huge first singles and then never reach any success that’s the same level.

That’s simply not the case for Post Malone, and one of the main reasons for that is he collaborated with a number of well-known artists for future songs.

“White Iverson” was noticed and received a lot of praise from well-known rappers such as Wiz Khalifa and Mac Miller.

The great part about praise like that isn’t just that it’s nice to hear from other successful artists; it helped Post Malone gain some following from fans of those other rappers.

He did a great job of collaborating with other famous musical artists that really contributed to how Post Malone became famous.

One of his first big collaborations was with Justin Bieber.

As a result of that collaboration, he ended up serving as one of Bieber’s opening acts for the Purpose World Tour that ran during 2016 and 2017.

Other artists who Post Malone collaborated with on songs included:

In fact, Post Malone met Kanye West when he performed at an 18th birthday party for Kylie Jenner, who is the half-sister of West’s then-wife Kim Kardashian.

That led to Post Malone being featured on West’s single “Fade.”

With all of his success and new notoriety, Post Malone went on to release his next album, “Beerbongs & Bentleys,” in 2018.

The first single from that album, called “Rockstar,” reached #1 on the Billboard Hot 100 and remained there for eight weeks in a row.

Rolling Stone magazine even named Post Malone “one of the most popular musicians in the country” for 2017.

When the “Beerbongs & Bentleys” album was released in 2018, it debuted in the top spot on the Billboard 200, selling the album equivalent of 461,000 units in the first week as a streaming offering on Spotify.

He Stayed True to Himself with Sponsor Deals

When people become famous, many seek to branch out and delve into another area where they can gain extra notoriety and, of course, earn extra money.

Not everyone who realizes success does this, but many do.

This can be great for a lot of artists, but it can also be devastating to their careers if they aren’t careful. Post Malone, to be sure, was very careful in this respect.

One thing he made sure not to do along the way was to stray from his original brand and ostracize his original, hardcore fan base.

For Post Malone, this meant staying true to his roots of being a down home-type of person who isn’t consumed with the luxuries in life.

To this point, he struck deals with companies that matched up with that brand he had already created.

Some of those brands included:

Some successful artists will use their newfound fame to accept whatever endorsements with whatever companies that are offering them lucrative deals to make money.

Their focus is on becoming more famous and richer in the process.

While that’s all good for some, it can alienate their true, original fanbase, which often results in a short-lived career — at least compared to what it could be.

Thus far, Post Malone has not given in to some of those potential temptations, sticking with companies that match up with his brand, and that of his fans.

He Is Relatable to His Fan Base

The main contributing factor to how Post Malone became famous was of course making great music that his fans loved. But there was always a focus on remaining relatable to his fan base.

Not only do fans love the themes and style of his music, but he’s continued to stay relatable to them as a person.

This is evident in what companies he partners with in brands, and what artists he collaborates with.

But, it’s also how he comes across in interviews and the image he portrays — he is true to himself at all times.

One example of this was in that interview with The Fader. He was asked what he went to school for, and his reply was:

“Just to get my parents off my ass for a little while. My parents wanted me to go to school, but they supported me when I told them I was moving out to L.A with my friends with nothing. My dad is my biggest fan, which is cool. My mom doesn’t get it. My mom is crazy. I love you, though.”

It’s that type of down-to-earth reply that engenders people to Post Malone, not just as an artist but as a human.

People love to consume content and buy products from people and brands that they can relate to.

Post Malone is that person to many people, which is why it’s very possible that he continues being successful.

Post Malone has stayed true to what helped make him become famous in the first place, and he’s continued to make great music in the process.

The story of how Post Malone became famous is a long and complex one, as you can see from above.

It’s a truly great story, and one that other artists can follow if they too want to learn how Post Malone blew up so they can follow his blueprint for success.