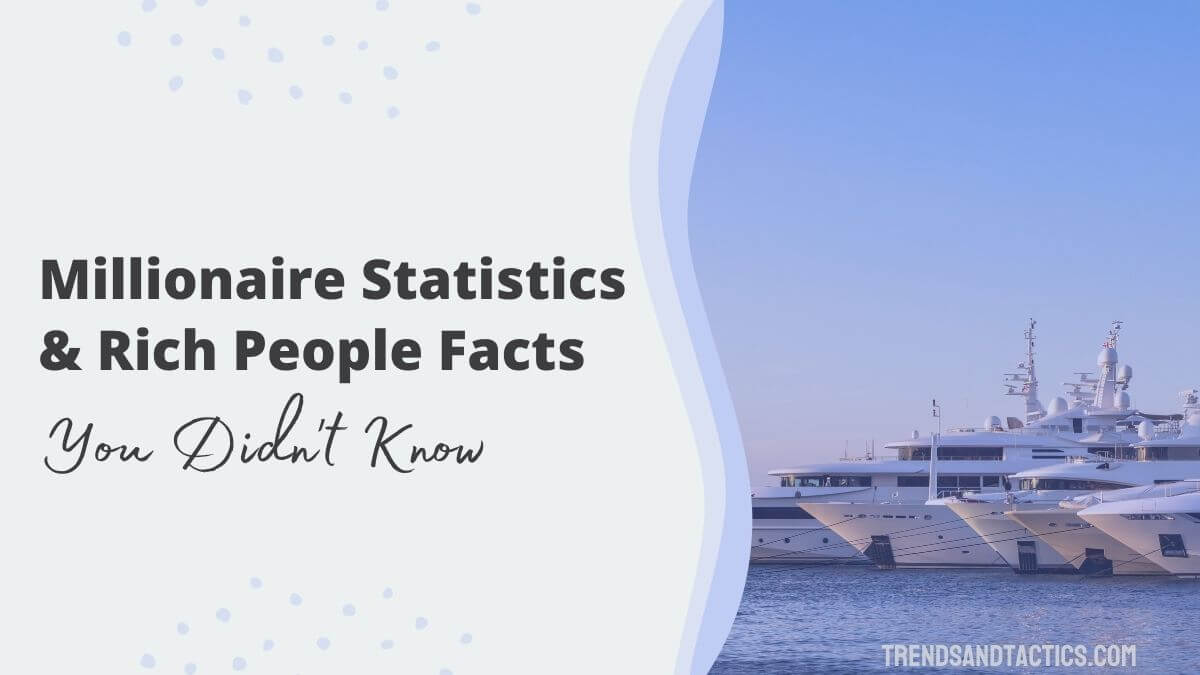 The top one percent of wealthy people on Earth hold half of the world’s finances. Most people are at least curious how these billionaire and millionaire statistics can be true.

Although no amount of rich people facts can guarantee a spot in the 7 figure club, it can be a great inspiration for those who need it.

These are 68 facts about the wealthy and influential, and what sets their lives apart from the rest of us. Although many assume all wealthy people are born with a silver spoon in their mouth, that’s not necessarily true for all of them! Some come from more humble beginnings, when setting out to make their fortune. Money can’t protect you from everything, and many say it doesn’t cause happiness. So how are wealthier people doing? These facts delve into their psyche and physical health. If you want to be sure your financial lead is a good one: it’s a great idea to get advice from someone who’s already succeeding.

These are the billionaire statistics for where they think future profits lay.

There’s an ongoing myth that all billionaires and millionaires start their mornings earlier and get more hours out of their day.

Although this isn’t true for all of them, some signs are pointing towards interesting lifestyle choices.

When you’ve made over a million dollars in your life (or billion for some!), it’s a good idea to know how you’re going to protect that money.

This is how the wealthiest keep an eye on their finances.

How to Build Wealth Statistics

Inflation drives down the worth of a dollar, which means that any money that’s not invested is money lost.

However, wealthy people understand the importance of using money to make money, which is how they approach this task.

Where and how the wealthy keep their wealth can inform how much it builds over time.

This is the breakdown of the average rich person’s finances and how they keep their money.

Having an extraordinary amount of wealth can change how people treat you and how you view yourself.

But, beyond that, your relationship with capital can change how you view the world at large. This is what sticks out to wealthy people.

How Millionaires Got Rich Statistics

Beyond how they made their money, many millionaires and billionaires claim they’ve cracked the code on how to make more money and block out losses.

If you want in on those secrets, here are some they let slip out.

What Industries Did They Start Out In?

Everyone has to start somewhere! Although most billionaires never had to wait tables for a living, some of them have had incredible underdog stories that many find inspirational.

These are the industries that helped them gain a foothold.

Although each of these facts can be inspirational, and many offer fantastic insight on how to get your start in business: not everyone can reach the levels of wealth they have.

Take these facts, and apply them to your own life where you see fit, but remember to be realistic with your finances and make decisions that will help you succeed in the long run.