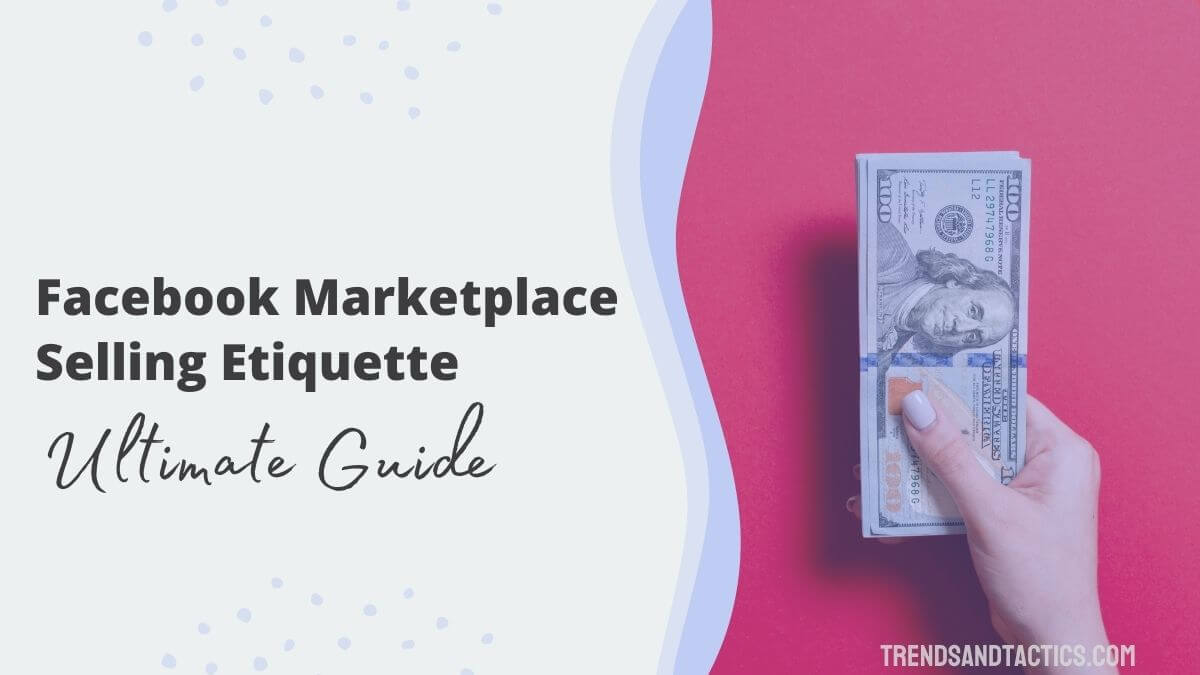 Selling anything can be a lot of work, so you must pick the right platform to sell on.

Facebook Marketplace has over a billion users and its own language for buying and selling.

Getting to know Facebook Marketplace selling etiquette ensures that you communicate in a way that buyers expect and that you’ll be able to seal the deal on far more products.

These are the best tips for selling on Facebook Marketplace and why it’s a great platform to work on.

Facebook Marketplace has been growing since 2015 when the site introduced “buying and selling” groups, which allowed users to list items at specific prices and communicate with buyers far easier.

This growth meant that sellers who started as small retailers quickly gained fast sales on Facebook Marketplace and suddenly operated an entire business through Facebook.

This portion of Facebook is now on par in popularity with Craigslist and has made a name for itself in resell and small business circles.

Whether you are selling video games online or starting an online clothing store, Facebook Marketplace can be a great tool for you and your business.

Trend On the Rise

In 2019 6% of people polled said they used Facebook Marketplace: that number has more than doubled since then, meaning that your reach is far further with this market than it has been in the past.

Facebook marketplace is worth selling on! There are thousands of people, including Eden Ashley of Mint Notion, who have made a substantial income from it.

In her first week of selling, she made almost $700 selling her own items and quickly switched over into reselling.

Of course, as she points out, it depends on how much your items are worth to begin with when you start out. If you can fabricate or make your own furniture, it’s a great way to build a business. Some items have an incredibly high resell value if you have the right skills. Mechanically inclined individuals can resell dirt bikes and potentially earn $1,000+ per flip.

You can’t buy or sell some items on Facebook Marketplace, including adult products, alcohol, digital media, and gambling products: but if you’re reselling products or crafting your own, there usually isn’t an issue with this.

If you’re unsure whether your items will be allowed, research the list that Facebook Marketplace updates every year just to be safe.

Selling on any platform can be difficult if you don’t know the unwritten rules that come with it. These are the most important things to understand about Facebook Marketplace and tips to follow to help you sell faster.

1. Don’t Talk Down to People

Although you may not feel like you’re being condescending, people are sensitive to being talked down to: especially when money is involved.

Generally, keep a friendly and light tone, and people will be more willing to trust and want to do business with you.

2. Respond to Everyone in a Timely Manner People don’t want to wait around for something that they’re not sure will happen, and may quickly contact another seller that’s offering something similar to what you have.

Make sure you respond to all buyers as soon as possible and keep your answers clear.

Most people will lose interest in an item after 24 hours: so you must keep in some-what constant contact and let them know anything they need to know about the product during that time.

3. Update Listings When They Sell

When you sell something, take the time to remove your listing or update it if you’re selling multiple items at once.

This will ensure that you won’t get many comments about something you don’t have anymore and that buyers won’t feel like they wasted time contacting you.

If you find an item for a low price, it’s bad etiquette to immediately resell it on the marketplace unchanged.

Although you might feel like it’s a great way to make money: people on Facebook Marketplace notice resellers and view it as a rip-off, leaving a bad mark on that seller.

Trend On the Rise

The reseller market is currently worth 17.5 billion dollars: so you can still buy things and resell them, just try to source your products from somewhere besides Facebook Marketplace.

Have your general location on every listing so that if people have to travel to get it, they can make that decision before contacting you.

This will save both of you some time, and will leave you more open to buyers.

Pay to hold means that someone pays upfront for an item until they can pick it up.

If you offer this, make sure that you remove the listing or say ‘sale pending’ on it until they’ve picked up the item so that others won’t try to contact you about purchasing it.

Not only does doing this make it so that nobody wants to buy from you, but it also makes it so that people have less faith in the rest of your listings, assuming that you’re overpricing everything in the same way.

8. Don’t Get Aggressive About Negotiating

Negotiating is a huge part of Facebook Marketplace and is something you’ll have to get incredibly skilled at.

To do this, it’s important that you know your limits for how low you’ll go in price and that you get to know the tricks people try to use to get your prices lower.

Have some flexibility, but don’t get aggressive if people cost far too low; just say you can’t accept that and move on. If you plan a meeting with a buyer: plan to show up at least five to ten minutes early so that you’ll be there when they arrive.

This will make it so that they have less of a chance to flake and will encourage people to purchase from you again because they’ll feel like you’re someone they can trust.

Also ensure that you are handing over your product in the condition that your buyer is expecting. Here are some tips on how to package clothes neatly and professionally.

If you have a vehicle that allows you to deliver your products: it’s a good idea to offer delivery at no extra charge if they’re nearby. This will enable more people to buy from you and give you a chance to be a more respected seller.

10. Don’t Price to the Bottom Against Other Sellers

Some newer sellers employ a tactic to research what similar items are for sale on the marketplace and then will specifically price their items to be ten to fifteen dollars cheaper than the other options.

This lowers the price of everything on the market and makes buyers stingier about what they buy: don’t do this.

Make sure to space out your listings instead of spamming them all at once.

Not only is spamming bad for you because people will be less likely to read through all of your listings at once: it hurts other sellers because it buries their listings, which in turn will leave them frustrated with you. Something some buyers will do is purposefully arrive with less money than you agreed on or will try to bid lower after they come. Don’t accept this.

Make it clear that you’ll only accept what they offered before meeting, and if they don’t want to pay that you don’t want to do business with them.

This can be hard to do, but making the new deal based on their behavior will make them think that’s something they can often do.

13. Go In Order of Who Messages You First

When contacting buyers, contact them in the order of who messaged you first, unless someone is offering to pay more than the others.

This is the fairest way to do it and will ensure that everyone gets treated the same.

If someone shows interest in your items, don’t spam them constantly asking if they’re still interested or trying to get them to seal the deal if they stop responding.

This could kill the deal and make it so that they don’t buy from you in the future.

15. Be Aware of Gougers on the Site

If someone buys something from you, and you see them relist it almost immediately for a huge mark-up: make it clear that they did this in the community.

Most marketplace communities don’t accept this behavior, and it’s good to report.

Following all of these to some degree will help you sell and give you a great chance at success.

It can be upsetting if your items don’t sell quickly. Fortunately, there are some changes that anyone can make to their products or pieces to ensure that they sell far faster than you’d expect.

As long as you’re active and you most often in the marketplace, ensuring that your products are of great quality, you won’t face any trouble making your business take off on Facebook Marketplace.

Whether you’re trying to start a small business or you’re looking to sell off the extra items that you don’t need anymore, Facebook Marketplace is an incredible option that will make it far easier for anyone involved.

Start posting today, follow these etiquette tips, and you’ll sell in no time!