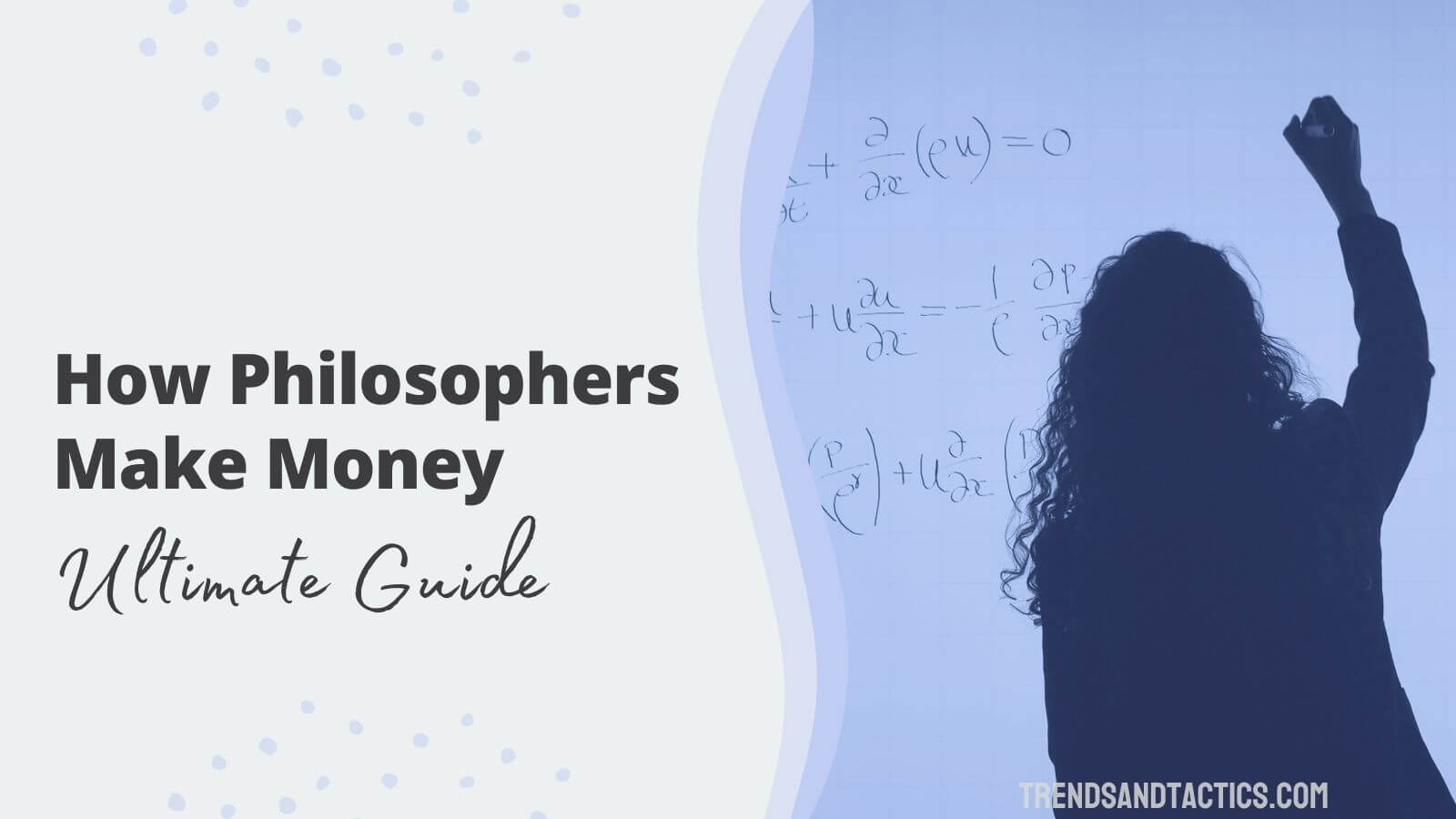 Philosophy majors have been working hard to be recognized on the global scale for eons, yet it can be hard to explain your major when it branches into so many different types of work.

So, how do philosophers make money?

These are the ways to get into this line of work, what jobs in philosophy can offer, and why it might be the best choice for you!

How do philosophers make money?

Working as a philosopher isn’t the average outcome of a philosophy major. In fact, only a small portion in this role get to succeed in it.

Those who do end up primarily working for colleges, universities, government bodies, and publishers. This is similar career outlook for those looking to make money with a psychology degree. The main role of the modern philosopher is in publishing their research, teaching in an academic institution, or publishing books, papers, and other material.

Although this isn’t as free as many hope for when thinking about a philosopher, it’s still a role that allows you to think and share your thoughts as freely as possible.

Some modern philosophers, like Massimo Pigliucci, use their abilities to inform people on how to follow specific classes of thought.

He makes his largest income from publishing his books, public speaking for a publisher who hires philosophy majors and does interviews.

If publishing isn’t inspirational for you, you could go a more modern route and consider taking on a philosophy podcast. This is another alternative job for psychologists as well.

This allows you to speak freely to an interested audience, and explain your research, what intrigues you, and your own ideas.

Most philosophy majors don’t go into this role, though. Instead, they chase jobs ranging from educating to being reporters and even working as lawyers.

Philosophy offers some of the highest-paying entry-level jobs, and since a drop in majors of 35% in 2018, there are tons of openings for recent graduates.

How much do philosophy professors make?

The job market for these jobs has been positive since 2008, which means that it’s had a good history of growth.

The best part is: there’s been a shortage of philosophy major graduates since 2018! Although this isn’t great for the businesses that desperately need them, it is awesome for those who want to take on this job because it means there are more openings, more chances for growth, and higher chances of getting a great salary.

Check out these other great paying jobs that make over 300k a year.

The Average Pay of Philosophy Professors:

Although the average philosophy professor makes just over $50,000 a year- you can absolutely make this go higher the longer you work in the role.

Educational facilities look for professionals with experience, and if you’re in an area that already offers higher wages, you have an even better chance of succeeding.

It’s important to know your value and avoid signing a multi-year contract with an institution that doesn’t have your best interests at heart.

If you have to work somewhere to build up experience, but for lower pay, either request a pay raise to be put in your contract after a set number of years or require that there’s no multi-year contract in place.

How do you become a philosopher?

Becoming a philosopher is far easier if you’ve worked through getting an education. The first thing you’ll need is a bachelor’s in philosophy.

Going to an accredited university will help you earn your BA and will give you the chance to make connections that can eventually help your career.

After this, you’ll need to go to graduate school to earn either your master’s degree or your Ph.D. in philosophy to take it further.

The cost of education to become a philosopher can add up quickly, so be sure to at least get college textbooks for cheap.

This will help you learn how to think like a philosopher and give you the opportunity to connect with your peers to better understand the role you’re taking on. As a philosopher, you’ll still need to make a decision on what area you’ll specialize in and how you’ll want to apply your studies.

Everyone is different and may want different things from this role, so it’s okay if you have to take your time to make a decision.

Unfortunately, almost a third of people who graduate as a philosophy major don’t get to work in a role that uses their degree, so it’s better to start looking for jobs that suit you earlier rather than later.

These tips for finding a job can improve your chances of finding work in your desired field.

The most important thing you can do as a philosophy major who’s trying to get into this line of work: is to be open to being wrong. Consider all alternative possibilities in a conversation, and focus on what’s ethical more than your own feelings.

Philosophers aren’t just people sitting in overstuffed recliners rattling off their ideas on the universe.

Instead, professional philosophers are best known as authors, teachers, lawyers, and other professionals who can put their minds to use to further humankind. This means that if you want a job that can help people: you’re in the right role. Another top position for those with a philosophy education is anything working in marketing and sales.

Having an incredible understanding of the human mind and what drives us to behave how we do, gives you the chance to thrive in this role.

All of these positions are high-paying and offer a larger return on your educational investment than you’d get as a philosophy professor.

Although many of them aren’t within the same field, they’re still great ways to make a living.

If you want to still be published as a philosopher, you can double up and do that at the same time until you make enough in that role to make it your full-time position.

Taking on two jobs at once can be draining, but it’s worth it to eventually get to work within your own field.

It’s vital to get an education, but you may have to fight for your role in the job market. Only 66% of philosophy majors are in a role that calls for their degrees.

Corporations love to hire philosophy majors to help with their own success. One of the main places you’ll see this is in the role of a practical philosopher.

Practical philosophy uses philosophical methods and insights to explore how people can lead more reflective lives and also helps companies to gain insight into how people work and think.

Because of this, many corporations hire philosophy majors for roles like “chief philosophy officer” or “philosopher in residence” to help give the company a push above the competition.

In this role, you will still get to work within your field, but it will be serving the corporate agenda more than the human one.

The most important thing you can do as a philosophy major is to be open to internships and part-time roles to gain experience. Companies want to see if you work well with others and are skilled at what you do, and unfortunately, without experience, that’s impossible.

Although some may think that working for a corporation may work against their own interests or abilities, doing so is a great way to make a living so that you can further your abilities to get published and help others connect with philosophy.

Philosophers have an embarrassment of opportunities ahead of them, allowing these intelligent people to pick whatever job they want.

Make sure to get the experience needed and work hard, and you’ll make a handsome living in no time.