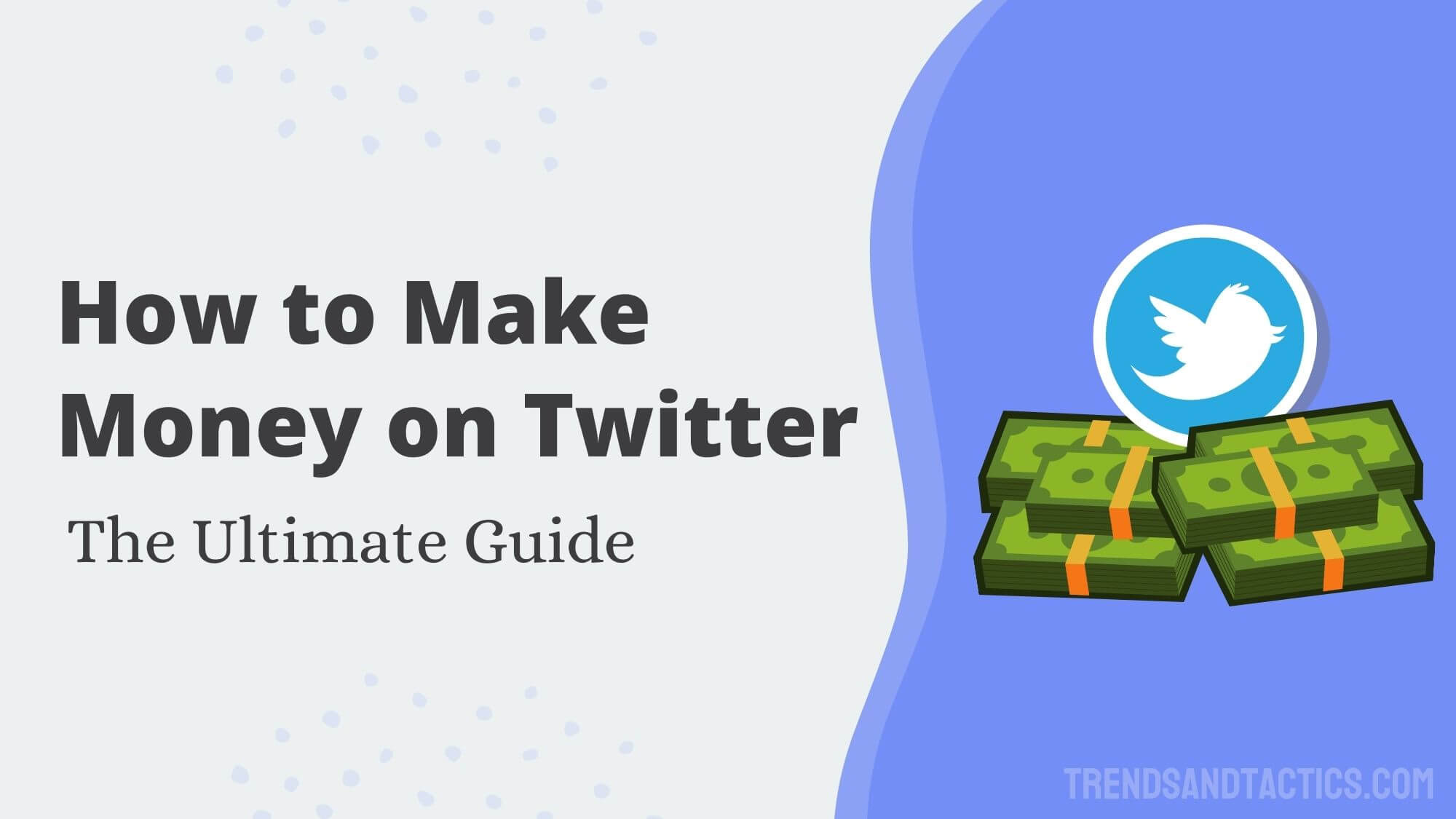 Are you curious about how to make money on Twitter?

Believe it or not there are countless ways to make money on Twitter, as there are on other social media platforms. You just have to know a few helpful tips and techniques!

Why Twitter? For starters, 87% of Americans ages 12 and up know what Twitter is, and 17 million people use it. That’s quite the audience if you want to make some money!

There are several ways you can use Twitter to make money.

It can be used as a lucrative side hustle by itself, in conjunction with other Internet or social media marketing plans, full-time jobs, or even second jobs.

Later on in this post, we’ll give you a few ideas of how you can make money on Twitter. While some of these have the potential to make you several (or even tens or hundreds!) thousands of dollars, you’ll have to put some work in to make that dream a reality.

Most of Twitter’s top earners are people who have really committed to the craft – or are already celebrities.

Kevin Hart, the world-renowned comedian, is often regarded as one of Twitter’s top-earning celebrities (depending on the day, he’s often THE top earner, full stop).

Hart makes money primarily through promoted tweets, as is the case with most celebrities who use the platform as an additional source of income generation. He’s made almost $14 million from just 46 promoted tweets since joining Twitter in 2009.

Fortunately, you don’t have to be famous in order to make money on Twitter. You just have to get creative.

Take Kris Sanchez as an example. This 25-year old is the face behind the Twitter brand @Uberfacts. All he does is tweet random facts – and he makes more than $500,000 per year.

His secret? He’s found a niche, and stuck to it. He gets paid per post as well as for the traffic he generates to third-party sites.

Being able to set yourself apart from the crowd is one tested-and-true way to make money on Twitter. That’s why, before you follow any of the tips we’ll give you below, it’s important to take the time to fully optimize your profile.

You won’t be able to do any monetizing unless you first have an audience base and quality profile.

The more attractive and memorable your profile is, the more traction you’ll get with any of the ideas we will talk about in detail below.

There are three things you should do if you want to make money on Twitter – be direct, be professional, and be personable. With that in mind, there are several things you can do to build wealth on Twitter.

Believe it or not, it is something that’s possible. Of course, having an established Twitter brand and solid analytics will help you land a job in this niche – since it shows you actually know what you’re doing, after all!

However, this side gig is a great way to prove to others that you can increase other account’s traffic and engagement. The beauty of Twitter is that you can make money just for tweeting! Of course, you have to have a partnership in place first.

When you have a decent following on Twitter, you can get paid by companies to tweet about their services, products, or brand. Sponsorships is also a common way to make money on Discord.

Reach out to companies you love and share with them the benefits they’ll receive if they hire you to promote their products.

Here’s another tip if you want to save time. Rather than reaching out to companies directly, you can use various platforms to connect with potential companies on Twitter. SponsoredTweets and PaidPerTweet are examples.

Depending on the audience and the influencer running the sponsored tweets, you can make anywhere from $1 a Tweet to more than $10,000.

Another way you can generate sales for your business is by creating Twitter Ads. These will help you reach more people online, including your current followers as well as other users.

The more people who know about your business, after all, the more money you can make! This is a pretty popular monetization strategy, and it works so well some people leverage it to make money in college without a job.

These look just like regular ads on Twitter but will have a note saying that they are promoted so it’s clear to viewers what they’re looking at.

Twitter Media Studio is another tool you can use to monetize your presence on Twitter. It’s kind of like YouTube, in which creators can monetize their channels and place ads in their live streams.

One tip – be sure to use the helpful analytics feature so that you can see which videos and content are performing well (and which are not).

Super Follows and Ticketed Spaces are invite-only spaces that can allow you to make some money as a content creator on Twitter.

What the exclusive content is will be totally up to you – it might be a newsletter subscription, bonus tweets, or something else along those lines.

One tip – to be able to access these spaces, you need to have a lot of followers and live in the United States. So make sure you do everything you can to build your presence if you want to tap into this gold mine!

Earning Potential: Up to $9.99 per month per subscriber

You probably aren’t going to make a killing with this revenue stream but it can help you generate leads and keep the customers you have.

You can use Twitter to offer customer service for the company you already have – and contrary to popular belief, you don’t have to have a massive company in order to provide customer service, either. You just need to be there for your customers 24/7.

Due to the minimal skill requirements of customer service, this is one of the ways teenagers make money.

Don’t want to tend to your Twitter feed 24/7? Don’t worry! With automated Twitter chatbots, you don’t have to be.

5. Promote Your Own Products

One of the most lucrative ways you can make money on Twitter is by selling your own services and products.

Since you won’t be reporting to anyone else, you can earn 100% of all the fees you collect – it can be much more rewarding than just selling a product someone else wants you to promote!

Consider using platforms like Gumroad to sell your products. Not only will you be able to sell pre-orders, but you can also sell pre-orders and create membership charges.

Membership charges are super helpful when you’re trying to create more reliable income on Twitter – these will be paid on a monthly basis so you’ll always know how much you have coming in.

If you aren’t sure how well your audience will take to the product you’re trying to sell, consider doing a pre-order promotion. This will give you a good idea of whether this is a sale that’s worth going through with or not.

One of the easiest, fastest, and most common ways that people use to make money on Twitter is to promote affiliate products.

What does it mean to be an affiliate?

It’s simple – you’re basically just serving as a brand ambassador for a product. Every time you promote and then sell a service or product, you’ll earn a commission.

In some cases, it can even be passive, since you won’t have to do anything at all once your tweet is posted.

Of course, in order to be successful as an affiliate on Twitter, you will need to have an established audience and show that you are a respected authority in whatever it is you are trying to promote.

You also need to do this sparingly. People will stop following your tweets pretty fast if they realize that all you want to do is shove products down their throats!

As a tip, be sure to research the product or service carefully before you start promoting it. That way, you won’t have to worry about damaging your reputation because you promoted something that ended up being a big dud!

If you do this full-time, you can expect to make a reasonable income from it, too – probably not enough for you to retire on, but a decent amount, anyway!

You can make a decent amount of money by running giveaways on Twitter, but the income generated will be through the traffic you drive to your website or products, rather than direct money earned.

Use a tool like RafflePress, a giveaway plugin, to help take the guesswork out of your campaign and to both build and manage your raffle.

By doing this, you’ll be able to generate new traffic and grow your Twitter following all at once.

Earning Potential: all income generated will be indirect

If you don’t want to sell other people’s products or create your own, another way you can use Twitter is to promote your own website, blog, or business. It’s essentially just a promotional tool!

You can use hashtags or @-mentions when you write your tweet, using these to direct people to your blog.

Here’s a tip to help you get more leads and more traffic. If you’re providing a specific type of service, you can type that into the Twitter Search Query to see conversations and tweets of people who are looking for that service.

This will give you some insight into the best ways to promote your services – of course, you can always hop into the conversation and promote your own services there, too.

It’s tough to give an earning potential for this Twitter income generation idea, since there’s a wide variation here. However, you might expect to make around $57,000 as a website manager with no other services provided.

Whether you have your own website or are just promoting your brand or product on Twitter, having an email list is a great way to get more leads and advertise whatever it is you are trying to sell.

Email is better than a lot of other marketing techniques since it tends to be more personal and one-on-one. You’ll be able to build lasting relationships with potential customers.

When they choose to be on your email list, that means they are doing so voluntarily – they want to hear from you! You’ll have a more captive audience in this way.

Here’s a tip – when you’re trying to encourage people to sign up for your email list, make sure this call to action is front and center in all of your tweets.

Encourage your audience to sign up for your email list if they enjoyed your thread – and be sure to include a list of benefits they’ll receive once they opt in.

There you have it! As you can see, understanding how to make money on Twitter isn’t nearly as complicated as you might have thought.